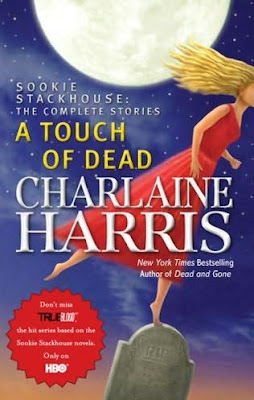 Urban Fantasy authors are a tricky bunch. They like anthologies, they like contributing to anthologies and if they are authors with a series they LOVE to write anthology-stories based in their established universes. This can be tricky for readers – most of us don’t really want to spend money on a collaborative book in which only one of our favourite author’s stories appears. It’s more likely we’ll try and borrow the anthology book from the library or just settle with never reading it at all. But it’s frustrating when one little story in an anthology ends up impacting on an author’s established series.
Case and point is Charlaine Harris. Charlaine wrote the Sookie-based short-story ‘One Word Answer’ for the ‘Bite’ anthology. Only problem was in the story ‘One Word Answer’ Charlaine introduced the back-story to a minor character who would go on to have a big impact on the 6th Sookie Stackhouse book; ‘Definitely Dead’. Cousin Hadley. Many Sookie Stackhouse fans complained that ‘Definitely Dead’ had a confusing plot because Charlaine wrote it expecting that her readers were familiar with the short-story ‘One Word Answer’, which was the starting plot point for ‘Definitely Dead’.
To aid confusion (and because ‘True Blood’ has seen the Sookie books blow up!) Charlaine has released a book compiling all of her Sookie-based short stories. Hallelujah!
There’s five all together; "Fairy Dust," "One Word Answer," "Dracula Night," "Lucky," and "Giftwrap”. Not all of the stories are as important to the overall Sookie series as ‘One Word Answer’.
‘Fairy Dust’ gives a lot of back-story to Claude, Claudine and their dead sister, Claudette. But the other stories are just a bit of frivolous Sookie fun.
My favorite is ‘Dracula Night’, in which Eric Northman throws a Halloween party for Count Dracula in the hopes that the famous vampire will make an appearance at Fangtasia.
I love Charlaine Harris – I’ve read all of her books and would gladly pre-order her grocery list from Amazon if she were so inclined to publish it. This collection of short stories is a real treat for die-hard Sookie fans. And there’s the added bonus of accompanying illustrations by Lisa Desimini for each of the five short stories.
I have only two complaints about the collection. The first is the ugly ‘True Blood’ promo on the front cover that detracts from Desimini’s beautiful illustration. My other grumble is the fact that there’s no new short story. After paying for the hardback collection I would have appreciated one new Sookie story for my money.
If you’re a big Sookie fan you’ve probably already figured out the cousin Hadley dilemma in ‘Definitely Dead’ by visiting chat boards or Charlaine’s FAQ page. And if you’re a mega-Sookie fan like myself, you’ve probably already read all these short stories. So ‘A Touch of Dead’ is probably not going to impact on your enjoyment of the series. But it’s nice to have the stories in one book, and they are Charlaine Harris stories, so they’re guaranteed to please.
4/5
Posted by Danielle at 3:23 PM