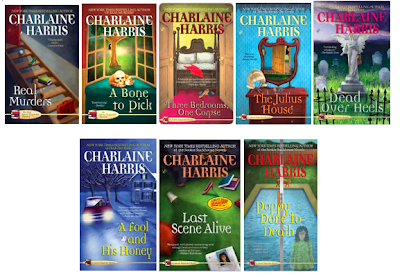 ‘Real Murders’ from the BLURB:

Lawrenceton, Georgia, may be a suburb of Atlanta, but it's still a small town at heart. Librarian Aurora "Roe" Teagarden grew up there and knows more than enough about her fellow townsfolk, including which ones share her interest in the darker side of human nature.
With those fellow crime buffs, Roe belongs to a club called Real Murders, which meets once a month to analyze famous cases. It's a harmless pastime--until the night she finds a member dead, killed in a manner that eerily resembles the crime the club was about to discuss. And as other brutal "copycat" killings follow, Roe will have to uncover the person behind the terrifying game, one that casts all the members of Real Murders, herself included, as prime suspects--or potential victims.
Once again Charlaine has a thoroughly ordinary female protagonist repeatedly thrown into extraordinary circumstances. Aurora is perhaps the most outwardly hum-drum of all of Charlaine’s protagonists; she is a librarian, complete with modest cardigans and horn-rimmed glasses. But don’t let appearances (or occupation) fool you. Aurora is just as interesting and lovable as Charlaine’s other leading ladies, maybe even more so because she is aware and makes fun of her outwardly plain-Jane appearances. Like Lily, Sookie and Harper, Aurora is an appealing protagonist because despite self-doubt, when push-comes-to-shove Aurora becomes a brave and ballsy heroine.
There is a lot of suspended belief in the Aurora series – throughout 8 books we are expected to believe that Aurora just keeps stumbling and unwittingly becoming involved in all the murders around town. But because Charlaine beautifully incorporates the bizarre with the mundane of Aurora’s everyday life, and because she constantly makes a joke of the coincidences, you really don’t mind the improbability inherent in the series.
“Two murders,” he repeated. He took his turn at head shaking. I would have to find someone at whom I could shake my head incredulously. “She just confessed two murders to you. How do you do it?”
‘Aurora’ is a fascinating series if you’re coming to them after reading Harris’s ‘Sookie Stackhouse’ books. Aurora is surprisingly similar to Sookie; both are women whom, at the start of their respective series, are really unaware of their femininity and have lived fairly sheltered lives. Sookie has been a loner because of her telepathic ‘handy-cap’, and Aurora because of low self-confidence and a focus on her work. Throughout their series both Aurora and Sookie are put through trials and tribulations that force them to come out of their shells and measure their mettle. But perhaps the ladies biggest connection lies in their romantic lives. As you compare both series you can pinpoint certain consistencies between the romantic entanglements. In both series Charlaine prefers multiple possible partners for her leading ladies, and enjoys keeping readers guessing as to whom they will ultimately end up with. In the ‘Aurora’ and ‘Sookie’ books Charlaine also puts her heroines through the romantic ringer – be warned, there are up’s and down’s that will tug at your heartstrings as you live vicariously through Aurora.
Unlike Sookie, Aurora has a tight family unit. This is really Charlaine’s only series that explores family dynamics and it is refreshing to read Charlaine’s funny take on family matters.
Once again, the ‘Aurora’ books are definitely murder-mystery. Charlaine has a very devious mind when it comes to writing crime, and it is a tricky pleasure to try and figure out the ‘whodunnit’ along with Aurora. But ‘Sookie Stackhouse’ fans should once again be warned that there is no element of urban fantasy in Charlaine’s debut series.
With a whopping 8 books in the series, Charlaine Harris has said in interviews that she has more ideas for Aurora Teagarden, but can’t see herself finding the time between Sookie books to pen a 9th novel. This is a shame. The eighth ‘Aurora’ book (‘Poppy done to Death’) did have a certain open-endedness to it – not so that it frustrates and leaves readers hanging, but just enough that you’ll wish Charlaine would continue with the series.
I don’t love the ‘Aurora Teagarden’ books as much as Harris’s ‘Lily Bard’, ‘Sookie Stackhouse’ or ‘Harper Connelly’ series’. But I do love them. I love Aurora, I love her leading men and I highly recommend this series to anyone who loves Charlaine’s writing and a good murder-mystery.
5/5
Posted by Danielle at 7:22 PM