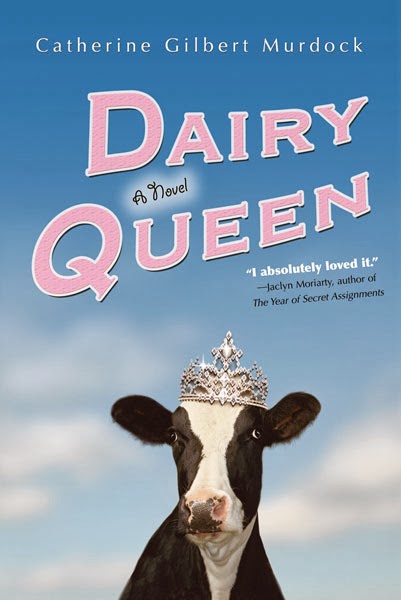 Stuff like why her best friend, Amber, isn’t so friendly anymore. Or why her little brother, Curtis, never opens his mouth. Why her mom has two jobs and a big secret. Why her college-football-star brothers won’t even call home. Why her dad would go ballistic if she tried out for the high school football team herself. And why Brian is so, so out of her league.

Welcome to the summer that fifteen-year-old D. J. Schwenk of Red Bend, Wisconsin, learns to talk, and ends up having an awful lot of stuff to say.

D.J. Schwenk is the younger sister of famous Red Bend brothers Bill and Win – the two most beloved football players that Red Bend High School has ever seen. But it’s been a while since Bill and Win graduated, and went off to make the most of their football scholarships. Since their departure, rival football team Hawley are in a good position to clean up this season – but their one weakness is quarterback, Brian Nelson. He’s a popular rich boy whose dad owns a local car dealership, and even though he has a good arm he also has a tendency to blame everyone but himself when his team is down.

Now, normally D.J. wouldn’t think twice about awful Brian Nelson – between her dad’s hip replacement surgery and her needing to quit basketball to take care of their dairy farm, not to mention her flunking English class and her brothers abandoning the family since graduating high school … Brian Nelson should be the last thing on D.J.’s mind. But then family friend and Hawley coach, Jimmy Ott, sends Brian to the Schwenk Family Farm to help out with haying, milking and odd jobs.

Except Brian Nelson is no farmer, and he’s a whinger. No matter how handsome he is, or how good his throwing arm, D.J. sees right away that Brian needs to stick his head down and work his butt off if he has any hope of getting ready for football season, and she tells as much to Jimmy Ott. Funny thing happens though, when Jimmy suggests D.J. coach Brian in the weeks before school starts. Even funnier? – Brian agrees, and D.J. finds herself  coaching her town’s rival QB and discovering he’s not such a bad guy after all, especially when he gets her thinking about how she can turn her life around and not be such a cow…

I have been meaning to read this book for the longest time – pretty much since I started getting into book reviewing and talking to fellow YA bloggers. Adele Walsh (of PersnicketySnark fame) has been particularly vocal in my need to read this book – especially since I’m a ‘Friday Night Lights’ fan. Finally I stumbled across a copy at my local (independent!) bookstore and snatched it up … and after about 30 pages I jumped online and ordered books #1 and #2 because I very quickly realised I had been missing out on a damn good thing.

I was immediately drawn into this book because of D.J. Schwenk – she’s our narrator, recounting the story of her crazy summer for the benefit of an unknown audience and her voice is utterly charming and almost hypnotic. Gilbert Murdock has pitched D.J.’s narration so beautifully – she’s completely earnest, sweet and bluntly funny. I loved her straight away. I also started rooting for her straight away when she slowly explains that her father has had hip surgery, her two older brothers have had a falling-out with the family since leaving for college and her youngest brother, Curtis, has a busy baseball schedule while her mum has recently taken on the job of acting principal at the school where she works. So it’s fallen to D.J. to take care of the Schwenk Family Farm – she’s up at the crack of dawn milking, haying and general maintenance around the falling-down dairy farm. As a result of all this responsibility, D.J. has flunked English and had to quit playing basketball (even though she was attracting scout attention). I also loved that D.J. is not a girly-girl – she’s a big, tall girl who loves sport and is never happier than when she’s running at full-speed.

Something Gilbert Murdock does so well in this book is to drip-feed readers with her tangled family webs. D.J. alludes a few times to a big family fight that saw her brothers, Win and Bill, stop speaking to their dad. She also speaks briefly about the fact that her father was a promising footballer and played for the army team, but had to come home and take over the dairy farm when his own father got sick. Then there’s D.J.’s little brother, Curtis, who doesn’t talk much and no one knows why (or asks – which is the Schwenk family way.) I loved that all of these dramas were simmering beneath the surface throughout the book, and made these secondary characters (who really didn’t have a lot of page-time) all the more robust and made D.J.’ s family life that much more interesting and complicated.

Of course, when family friend Jimmy Ott sends Hawley QB, Brian Nelson, to the Schwenk farm to help out, everything changes for D.J. She starts seeing her run-down farm through Brian’s eyes, starts listening when he questions her families’ dynamics and even her own role in the hierarchy. Admittedly, Brian is also very cute and popular (plus, QB!) but I loved that he’s more interesting to D.J. for how he makes her question the norm and her role as a cog in the wheel.

I felt like he understood everything I’d been through that night but we would probably never speak again. Not because I was a bad person, or because he was, but because, well, that’s just the way the world worked.

And let me say this: of everything that’s happened to me this crazy, stupid summer, in that one second that we looked at each other, that’s when I grew up the most. And I’ll just tell you now, it’s not … it’s not a particularly pleasant emotion.

I also have big admiration for Gilbert Murdoch for throwing in so many sensitive “issues” without ever treating them with kid-gloves or like she was ticking “serious teen issues” boxes in the writing. She examines gender inequality, homosexuality and challenging gender stereotypes – and all of them thread so beautifully through the main storyline.

This book is AMAZING (I know, I know – I’m only about seven years behind the times). D.J.’s voice rings so genuine and believable that by the end of the book, I really felt like I’d just spent a few days with a great, new friend. Cathering Gilbert Murdock really beautifully sets up a long-haul story for D.J. in her little town of Red Bend, Wisconsin, and I absolutely can’t wait to read ‘The Off Season’ and ‘Front and Centre’.