‘This One Summer’ written by Mariko Tamaki illustrated by Jillian Tamaki 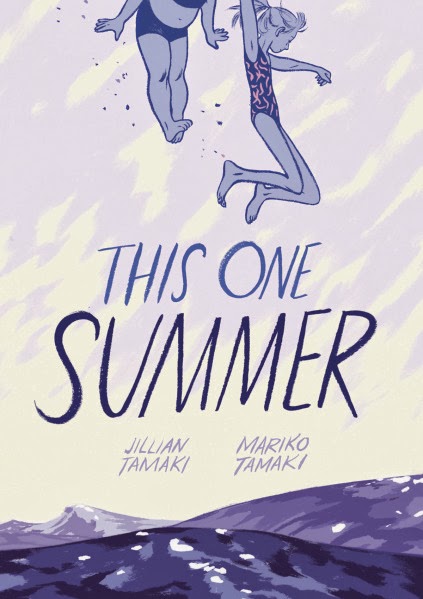 Every summer, Rose goes with her mom and dad to a lake house in Awago Beach. It's their getaway, their refuge. Rosie's friend Windy is always there, too, like the little sister she never had. But this summer is different. Rose's mom and dad won't stop fighting, and when Rose and Windy seek a distraction from the drama, they find themselves with a whole new set of problems. It's a summer of secrets and sorrow and growing up, and it's a good thing Rose and Windy have each other.

In This One Summer two stellar creators redefine the teen graphic novel. Cousins Mariko and Jillian Tamaki, the team behind Skim, have collaborated on this gorgeous, heartbreaking, and ultimately hopeful story about a girl on the cusp of her teen age—a story of renewal and revelation.

Rose and her family are going for their yearly trek to the holiday cottage in Awago Beach. They’ve been coming here since Rose was five, and every inch of the sleepy little town is filled with happy memories. But this year it’s different – Rose’s parents are fighting more than ever after they decided to stop trying for a second baby. Rose’s mum would rather lock herself in her room, and even though her dad tells her not to worry about “adult junk”, their fights are getting louder and louder. 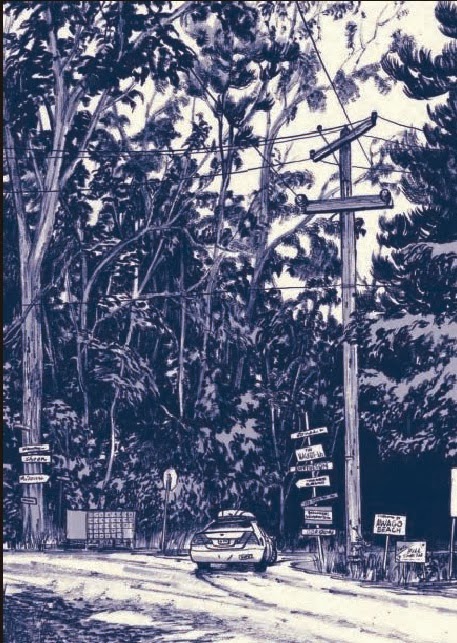 Perhaps the one good thing about Awago Beach is the ever unchanged Windy – a fellow weekender whose cottage is not far from Rose’s. Windy is one-and-a-half years younger than Rose, and while she initially enjoys her friends unchanging familiarity, their age difference starts to become clear when the girls get caught up in the local drama of Awago Beach teens.

Duncan is the lanky, floppy-haired teenage boy who works at the convenience store. Windy nicknames him “the dud”, but Rose is quietly curious about him. Even more so when she and Windy are witness to Duncan’s blossoming relationship with local girl, Jenny.

As Rose’s mum retreats more into herself, and Windy’s childish behaviour starts to grate, Rose gets caught up in the local love story drama and is unnerved when Duncan and Jenny’s story hits close to home.

‘This One Summer’ is a young adult graphic novel drawn by Jillian Tamaki and written by Mariko Tamaki from First Second Books. 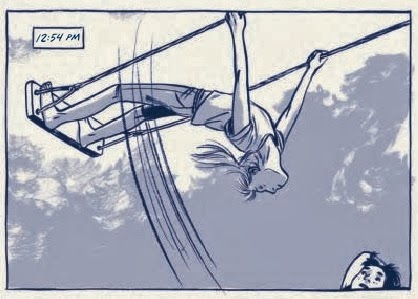 I loved this novel. Jillian and Mariko Tamaki so perfectly capture a salt-sweet story of a young girl’s summer teetering on the edge of young adulthood. The story begins simply enough, with only the barest hint of a storm brewing in Rose’s family. The monotony of a lazy summer is beautifully drawn out in the tick-tick-tick time passing panels showing Windy and Rose enjoying their holiday by keeping a schedule they seem to know by heart.

It’s not until the girls get caught up vicariously in the drama of a local boy who works at their convenience store that cracks come unbidden into their friendship. Rose’s fascination with Duncan “the dud” is at odds with Windy’s complete and utter disinterest (verging on disgust) for him; highlighting the girl’s age-gap that will probably turn into a chasm by next summer. 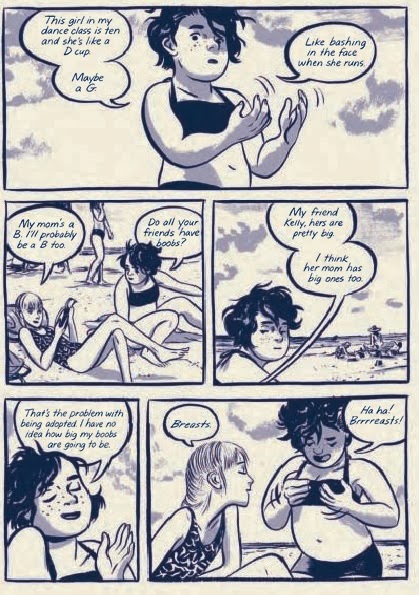 Jillian and Mariko Tamaki beautifully translate the girl’s friendship on the page – particularly in gorgeous double-page spreads that shows the girls being completely joyous and carefree, versus Rose’s hunched form when she finds herself in the company of teenage boys.

Windy was really the star of the novel for me. She’s raised by a single, vegan mother and is very proud of the fact that she attends a New Age school back home in the city, with classmates who are mostly raised by lesbian parents. She’s hilarious, and right at that age where she’s fascinated by growing older (and getting boobs!) versus Rose, whose going uncomfortably into darker adult territory. 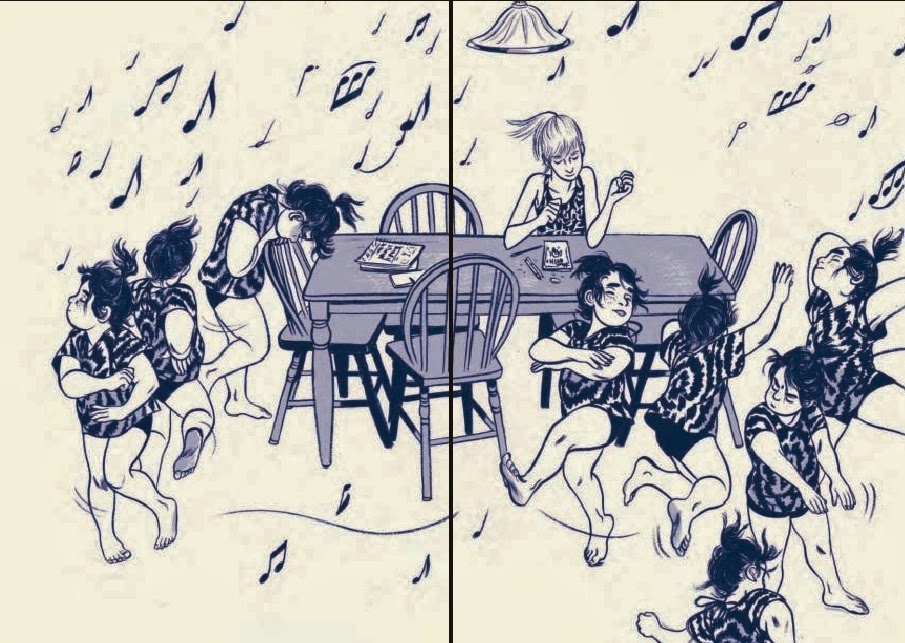 The illustrations are lush and drawn in blue-hues that emphasise the whimsy of these Awago Beach days. And Mariko Tamaki’s dialogue and story starts out as loose and poignant as the first days of a perfect summer, and then coils tighter and tighter towards the end – I particularly liked the many panels when Rose took over narration and reflected on her past memories of Awago Beach, often coloured by happier times with her mother who’s increasingly drawing away from her in the present. 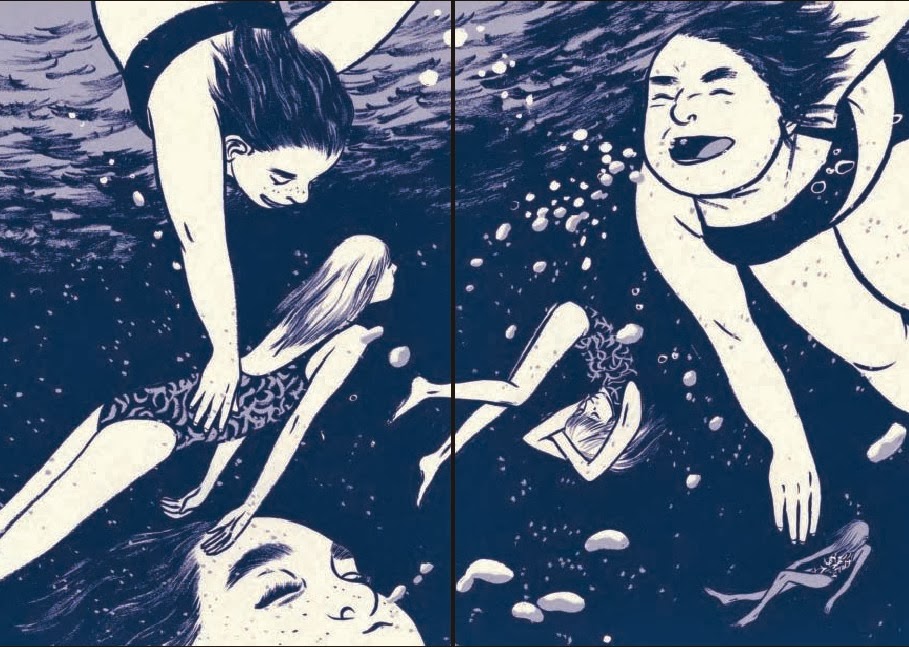 This is a beautiful coming-of-age-story about being on the cusp of everything. I've no doubt that next summer at Awago Beach, Rose will more than ever feel the differences between her and Windy and they’ll never again enjoy a summer like this one. ‘This One Summer’ feels all the more special because, as readers, we probably know that it will be looked back on by both girls as they grow older as the last memories they have of a truly carefree friendship.

There's also a beautiful mother-daughter story in here, as Rose learns more hard truths about growing up. It's so subtly drawn out, the story between Rose and her mother, but once it's all out in the open the enormity of the summer settles over the reader in a very profound way.

Jillian Tamaki and Mariko Tamaki have created a truly gorgeous graphic novel. I hope everyone finds their way to this one in 2014.