'The One Plus One' by Jojo Moyes 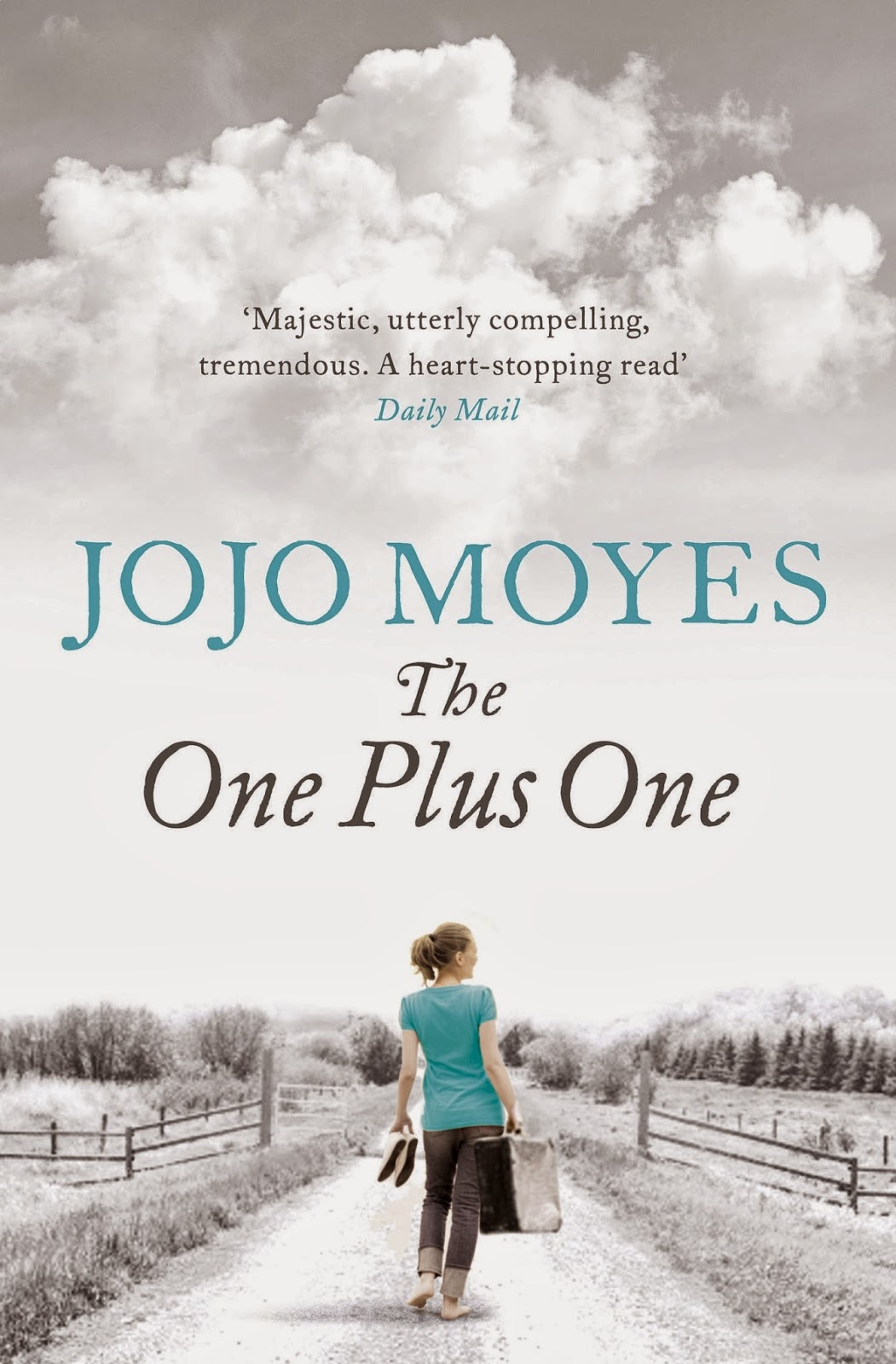 Suppose your life sucks. Your husband has done a vanishing act, your stepson is being bullied and your daughter has a once in a lifetime opportunity . . . that you can't afford to pay for.

So imagine you found and kept some money that didn't belong to you, knowing it would pay for your daughter's happiness.

But how do you cope with the shame? Especially when the man you've lied to decides to help you out in your hour of need . . .

Jess is in hell - Ed has saved her family - but is their happiness worth a lifetime's soul-searching?

Jess and Ed are two very different people, with vastly different problems – in fact, the only thing they have in common is a wicked streak of bad luck.

For Jess, it’s that she’s a single mum whose unemployed husband left the family two years ago to go and live with his mother, after suffering from a bout of depression which left him unable to work or pay child support. Since then Jess has been looking after their young daughter, Tanzie, and teenage son (who is actually her husband’s from a previous relationship, but Jess now considers Nicky as her own). Jess works two jobs – barmaid at the local pub, and cleaning lady with her best friend. But she’s always skint and living pay-cheque to pay-cheque and just a smidge above the poverty line. When her maths-genius daughter Tanzie is offered a tempting (but still too expensive) scholarship at the local private school, Jess’s money woes start to really impact the family. There’s also extra pressure since Nicky’s recent run-ins with the local bullies, the Fisher family. Nicky dresses alternatively, all skinny jeans and black eye-liner which, in a small seaside town, means he sticks out like a sore thumb and sees him being physically and emotionally abused by the local hooligans. Both Jess and Nicky don’t want Tanzie to go through the same sort of suffering if she enters the local high school next year (her maths obsession will make her a target, absolutely).

Ed Nicholls made a lot of money when he sold the app he and his best friend created. For a little while he was really successful, particularly when the company went public. And even though he’s divorced, and his model ex-wife keeps stealing from his London apartment (even after the settlement left her very comfortable) he was happy. What made him even happier was when the beautiful, unattainable Deanna from his college days reaches out to him and they start dating. It’s nothing short of a dream come true for Ed to be this successful and have the girl of his college dreams on his arm at the same time. But then Deanna starts showing her true colours – an unstable, clingy girlfriend with serious money woes and bad habits. When Ed decides to finish things with Deanna, she expresses a wish to get back on her feet and Ed stupidly gives her a tip about his company shares … which then leads to a charge of insider-trading, and a deadline for Ed to appear at the police station and be formally charged.

Jess and Ed don’t know each other, not really. But Jess does clean Ed’s beachfront apartment, and is present on the night he decides to drink his worries away at the pub where she works.

The next day their lives intersect again when Tanzie is offered a chance to win a cash prize at a maths Olympiad … in Scotland. Ed finds Jess getting ticketed by the cops on the side of the road – Tanzie, Nicky and their oversized hound, Norman, sitting in a beat-up and utterly un-roadworthy Cadillac. Feeling the need to put some good karma into the world, Ed suddenly pulls over to offer them a lift to the Olympiad.

What follows is a road trip unlike any other.

‘The One Plus One’ is the new novel from British author Jojo Moyes.

I adore Jojo Moyes. ‘Me Before You’ and ‘The Last Letter From Your Lover’ are two of my favourite books, and I just think she’s fabulous – I hate to see her described as “chick lit” or a “beach read” author because I think that fails to take into account how layered, impressively paced and utterly heart-hurting her novels tend to be. ‘The One Plus One’ is another gem, coming in at 528-pages with a multiple point-of-view storyline that is at once emotionally exhausting and completely engrossing.

I can’t think how else to explain this book, other than to say it’s basically Jojo Moyes presenting these two characters and then just heaping shit on them. I mean, seriously, both Jess and Ed go through the ringer (Jess more than Ed because, as is a big point Moyes is trying to make – being poor means you’re more likely to suffer longer and harder whereas, somehow, mud doesn’t seem to stick to rich people no matter how hard it’s thrown). This is a book of spiralling – just when you think it can’t get any worse for poor Jess, Moyes manages to dig her deeper and deeper into debt and heartache. But Jess is one of those rare, magnificent individuals who’s perpetually optimistic – she’s a wonderful mother and feels the need to keep on keeping on with a smile on her face for Nicky and Tanzie’s benefit.

Nicky, meanwhile, has a really bleak outlook on life. His mother was a drug addict who left him with his dad, the same guy who abandoned the family two years ago and who Nicky hates to think he shares DNA with. Nicky is being beat-up at school by the local hooligans (the kind of kids who, when the cops come calling round for witnesses, nobody saw anything) and Nicky is just down. Jess and Tanzie are both so worried about him, because life just keeps knocking him down. The first person to really break through to Nicky is Ed, a computer programmer who can sympathise with Nicky’s displacement in life;


Here it comes, Nicky thought. He wiped at his shoulder, where Norman had left a drool. ‘Everyone I’ve ever met who was worth knowing was a bit different at school. You just need to find your people.’

‘You know, you spend your whole life feeling like you don’t quire fit in anywhere. And then you walk into a room one day, whether it’s university or an office or some kind of club, and you just go, “Ah. There they are.” And suddenly you feel at home.’

‘I don’t feel at home anywhere.’


The road trip to the Maths Olympiad in Scotland takes a few days because Tanzie gets carsick, so Ed can’t drive over 40MPH. Pretty soon Ed regrets his decision to help this family out and rack up his karma good-points, but the trip becomes an epic experience for all involved.

‘That people like us never get on. We never move upwards. We just rattle around at the bottom, scrabbling over the other people at the bottom like rats in a cellar, everyone trying to keep out of the wet.’


Like with all of Moyes’s books I’ve read thus far, she likes to throw out really outlandish plots that are dependent on chance and circumstance. But as the story twists and turns she brings the story back to the heart of the matter – this is really about two people in vastly awful circumstances who find their way to one another. It’s a very human story that feels very grounded in the present – Jess struggles being from a low socio-economic background as she now sees how her children are being impacted by what they’re lacking, and Ed is a businessman who’s being investigated for a white-collar crime. These are two stories of our times, but I loved how they intersected and crossed over one another. ‘The One Plus One’ is a rewarding, heartfelt read and another gem from Jojo Moyes.