'The Cursed' League of The Black Swan #1 by Alyssa Day 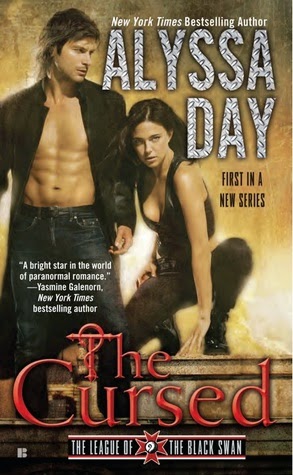 Bordertown private investigator Luke Oliver’s beat is the dimensional fold in Manhattan between the human and supernatural realms. But now a secret from his past—the League of the Black Swan—has surfaced. Because Luke isn’t any ordinary P.I. He’s the Dark Wizard of Bordertown, and he never backs down from a fight.

But this time the fight threatens his life and his heart. Rio Jones, the only woman he loved, needs his help against a deadly menace. Luke pushed her away once before, so she’d never fall prey to the curse that threatens to destroy him. He swore he’d never let her go again.

Luke and Rio, with the help of the newly reformed League, must keep evil forces from taking over Bordertown—all the while battling a passion on the razor’s edge between danger and desire. And going to take everything they have just to stay alive.

Luke Oliver has a problem, and her name is Rio Jones. He met the attractive bike messenger months ago, and swore to himself that he’d stay away … and by “stay away” he meant occasionally stalk her and scope out her relationship status.But Oliver can’t get involved with her. He’s been single for hundreds of years, and though she’s the most tempting thing to cross his path in all that time, he must remain strong and resist her temptation. Because Oliver is cursed – there’s a monster inside of him and losing his inhibitions to love could very well unleash it.But then Rio Jones goes and gets a target on her back, courtesy of the League of the Black Swan. She’s also witness to a child kidnapping that gets her stuck in the middle of a faerie high court. Things get even more peculiar when orphan Rio is suddenly hounded left, right and centre about her upcoming 25th birthday – and starts receiving hints about who her parents might have been. Of course Rio knows Luke Oliver – he of the sexy, sexy and someone she’s delivered packages to in the past – and she turns to him for help. Because everyone knows he’s a powerful Dark Wizard, who could walk into the role of Bordertown Sheriff, if he had any such inclination. The only problem is that Luke Oliver is more than happy to help the beautiful Rio Jones … because he’s tired of lusting from afar, now that the fates seem hell-bent on throwing her in his path, he might just act on his instincts. God help us all. ‘The Cursed’ is the first book in a new paranormal romance series called ‘The League of The Black Swan’ by Alyssa Day. There’s no other genre quite like paranormal romance for my quirky reading habits. It’s perhaps the one genre that I sometimes crave, but can over-indulge on and be put off reading again for months and months. I bought Alyssa Day’s ‘The Cursed’ back in 2013 when it was first released, anticipating that it might be a good book to have on hand the next time I got the reading-itch for some paranormal romance … and, boy oh boy, were my instincts right. First of all, this book falls into one of my most favouritest (but rarely done well) categories of paranormal romance – the happy coupling. That’s right – this is a book in which the protagonists establish their romantic connection in the first book, and it looks as though the series will follow them as a couple. I am quite partial to such books, Mercy and Adam in Patricia Briggs’ ‘Mercy Thompson’ series is probably my favourite example of a romance being established very early on and subsequent books focusing on the evolution of that romance. Ditto the spin-off series ‘Alpha and Omega’ with Charles and Anna. This in comparison to, say, Kate and Curran in the Ilona Andrews’ series whereby the couple start out as antagonists and do a lot of (albeit, delicious) toing and froing before getting together. BUT, the downside of an early established romance is often boredom, as I found with recent instalments in Jeaniene Frosts’ ‘Night Huntress’ series when Cat and Bones were head-over-heels from the start (seriously, don’t even get me started on last book ‘Up From the Grave’ except to say it’s a good thing that’s the last book) that made me realise there was more fun to be had in the chase than happily-ever-after right in the middle of a series.I actually have high-hopes and a sneaking suspicion that Alyssa Day has set Rio and Luke up as an established couple with plenty of rough-patches in store to keep things interesting between them, but also enough fated attraction to ensure they keep their heat. Between Luke’s curse (exacerbated by falling in love, no less!) and Rio’s unknown origins, this is one couple who will be interesting as a united front, but still have so much to learn about one another and what their attraction means for their futures.

“Big, tough wizard crying like a baby,” he said, mocking himself, and she knew he wasn’t only referring to the remembered dream. “Real romantic, right?”

She traced her finger over the curve of his sculpted lips and shushed him. “Maybe the most romantic thing I’ve ever heard.”

A thought occurred to her, though, and she laughed. “Except for ‘You were hurting, and I wanted to help, but I didn’t know how, so I blew something up.’”

His face flushed, and she fell back on the pillow, laughing even harder.

“You just blushed! After days of making me blush every time I turn around, I finally did it to you!”

“Maybe I can make you blush again,” he murmured.

A lot does happen in this book. Readers do get dropped into the world of Bordertown with very little back-story about this universe, and then the story hits the ground running with Rio witnessing a kidnapping and finding herself being offered recruitment into the League of the Black Swan. Then lots of fantastical creatures start coming out of the woodwork to discuss her 25th birthday … Not to mention a magic fox (Kitsune) also enters her life for reasons unknown – suffice to say; a lot happens in this book. But it’s never too jarring or messy, surprisingly, mostly because Day has grounded the story in Luke and Rio’s romance as the pivoting point (possibly even of the series). So it’s no surprise that Rio and Luke work very, very well as a couple. It helps that Luke isn’t your typical leading-man alpha asshole normally found in paranormal romance. He’s actually a bit of a shy geek, who happens to be a dark wizard of immense power and stunning physique (though he doesn’t seem at all self-conscious or self-aware of his handsomeness). He is alpha where Rio is concerned, but it’s more an instinctual reaction to her that he’s trying to tamp down, lest she get wigged out by his machismo. He hasn’t had a relationship for hundreds of years, and is very shy about trying to romance and woo the lovely Rio. Rio is also not your typical heroine – she’s an orphan with abandonment issues who’s always out to please other people, lest they leave her like everyone else ever has. She’s quite sweet and polite, smart and loyal but when threatened you realize she has a spine of steel. Together they work really well – and I’m going to enjoy reading how Luke’s anti-social shyness plays against Rio’s need to establish a connection with family. ‘The Cursed’ is a stellar introduction to a new series, and definitely satiated (and maybe sparked) my paranormal romance/urban fantasy cravings. I’m definitely onboard for this new series, after Alyssa Day well and truly suckered me in with this book and that splendid couple. 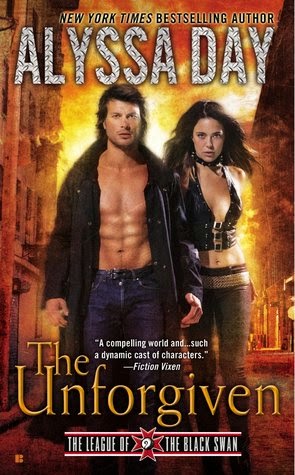 Email ThisBlogThis!Share to TwitterShare to FacebookShare to Pinterest
Labels: Alyssa Day, League of The Black Swan