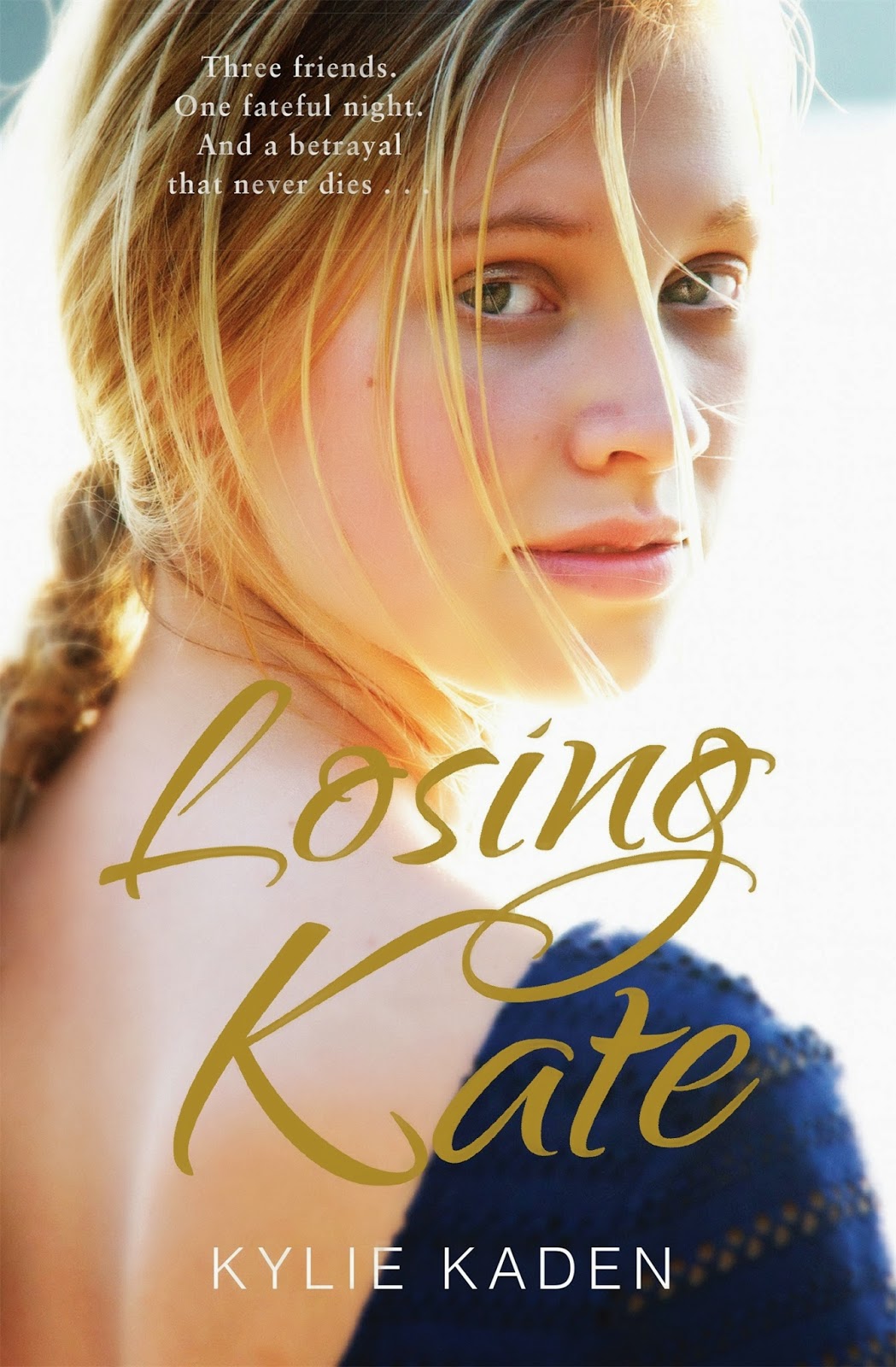 This mesmerising debut is part love story, part mystery, telling the captivating story of two lovers torn apart by tragedy and the secrets they kept of one devastating night.

I'm the most authentic version of myself when I'm around Jack. We've known each other since we were kids, and our relationship was always one of mudpies and mocking.

Beautiful Kate, my best friend, disappeared on a moonlit beach after Jack dumped her for me. Jack was a suspect and, sure of his innocence, I lied to protect him. I know Jack didn't kill her. Our betrayal did.

Thirteen years later, I am thirty, childless and single, attempting to renovate my life rescuing a rundown worker's cottage. All is as it should be in my safe little world – until Jack buys the vacant lot behind my house… and the feelings that we buried all those years ago – the guilt, the love and the pain - resurface.

We can't keep running away from the past – and to move forward we have to know what really happened to Kate.

Thirteen years ago Francesca’s best friend died under mysterious circumstances. Kate’s death made the papers, and suspicion was cast on her boyfriend, Francesca’s best childhood friend, Jack Shaw … so much doubt was cast, and mud sticks, so Jack and his family had to move away.

Thirteen years later Francesca, single and working a gruelling job as a social worker, has stayed in her hometown and bought a fixer-upper cottage next door to a house on vacant swamp land. But the day that land goes up for auction, she is shocked to discover the man who successfully bid is Jack Shaw – no longer young and gangly, but tall, handsome and with a partner and little boy, Oli, in tow. And he’s planning to stay the six months it will take to renovate the old house, six months of living behind Francesca, looking at her over his property line.

Jack immediately downplays his history with Francesca ‘Fray’ (as he called her) to his new partner, Sara. But the young, beautiful woman instantly suspects something is up when Jack’s old familiarity with Francesca starts to seep through their ‘new’ acquaintance. How could it not? This is the same boy Francesca played with in her backyard – running naked round the sprinklers. They were best friends in high school, even if Francesca wanted more, even if she was crushed when Jack turned his attention to the beautiful new girl and Francesca’s new best friend, Kate all those years ago…


... As usual, Jack makes me see things clearly. He is still my litmus test for the truth ...


Now Jack is back in Francesca’s life – reminding her of everything she doesn’t have, all the things they lost thirteen years ago and her growing pile of “what if?” questions. And with Jake comes memories of Kate – their beautiful, frantic, damaged girl. Memories of their last fraught day together, and how Francesca loved Jack so much, she even lied for him.

Kylie Kaden’s debut ‘Losing Kate’ is another beautiful example of the suburban-gothic sub-genre; blending romance and mystery with a sleepy suburbia backdrop that belies a darker underbelly. These books also seem to focus on the hazy days of one’s youth, where the best secrets are grown, and then examines them surfacing in the present where skeletons have been left languishing in closets for far too long … ‘Losing Kate’ is a blend of Liane Moriarty’s 'The Husband's Secret' and Frances Whiting’s 'Walking on Trampolines' (minus the gritty mystery) for how these books are about the old secrets of seemingly ordinary, suburban families surfacing in the present.

Adding to the gothic elements in Kaden’s debut is the Queensland settings of Toowoomba and Townsville, where the heat is oppressive, stilted houses peek into neighbour’s backyards and Francesca’s old crush has moved into the swampish lot next door. The story is narrated by Francesca in present-day, with the occasional memory lapse to 2000, the year Kate died and more specifically, the night she went missing. As readers, we’re thrown into the thick of it when Francesca is shocked to discover Jack Shaw has just moved in next door – over the course of the first chapter we gradually learn this is not just a case of an awkward teenage dalliance resurfacing, but Jack is in fact tied to Francesca’s entire childhood and the reason they lost contact these past thirteen years has to do with the death of his girlfriend, Francesca’s best friend, Kate.

I feel like I'm at a school reunion, my life being evaluated by the person who I started becoming a person with. We've lapsed into that small talk again, and I relax in a way I've only ever been able to with him. There's so much about the last thirteen years I don't know. Has he missed me? Has he missed Kate? Has he made his peace with what happened on that beach when we were seventeen, desperately trying to be grown up in an adult world?


Straight away ‘Losing Kate’ felt more like a mystery to me. I spent a good deal of the book’s first half suspicious of Jack and his sudden reappearance in Francesca’s life, seeming coincidental. I was even more suspicious when Francesca’s older brother (and another old friend of Jack’s) Ben, casts his suspicions on the whole situation as well – particularly the part where Jack’s partner, Sara, has no knowledge of Kate’s death and the accusations Jack ran away from, let alone just how close he was to Francesca. I can’t say I ever really stopped suspecting Jack of wrongdoing, even when the novel gearshifts and Francesca is tempted to rekindle what she always wanted with Jack. I think this came down to Kaden having written such a good whodunit, pulling on these gothic elements so masterfully, that it was hard for me as a reader to uncoil enough to trust in Jack and the romance elements that appear in the latter half of the story. For that reason as well, I wanted bigger pay-off with the mystery. There’s a big part of me that wished Kaden had kept things gritty, and cast real villains in this book … but, also to her credit, she instead makes her characters very real and very flawed – there are not real ‘villains’ or heroes in this tale, just damaged people muddling through life, trying to cope with the mistakes they have made (some terrible, others forgivable).

I particularly enjoyed that the ‘flashbacks’ in this book are set in 2000. It’s part of that 90s nostalgia I so love (because that was my era), but I really like that Francesca and Jack listened to Powderfinger and talked Nirvana, Francesca got annoyed at Ben for listening to ‘Teenage Dirtbag’ endlessly and there’s fond mention of discmans. The 2000 setting works really well, particularly for purposes of present plot when anyone can look up the details of Kate’s disappearance and death, and the media’s scrutiny of Jack, via quick Google search.

I really enjoyed this book, even while not particularly liking many of the characters in it. Kaden’s female characters are particularly hard to read– mainly Kate and Sara. Sara, I think, is somewhat shaded by Francesca’s view of her – she seems larger than life in her bitchiness, and could almost be the villain of the story … if not for the fact that I was always aware that I was reading her through Francesca’s eyes, with her jealousies over Jack and likewise Sara’s (correct) suspicions about the two of them. Kate, in flashback, reminded me (hauntingly) of Kate Kendall in Rachel Ward’s film ‘Beautiful Kate’ – a young woman whose beauty and confidence belies deep demons that continue to haunt all those she touched.


'She was like fireworks, Fray. She was never made to last.'


This was a book that I rushed to get back to; immensely readable and a great blend of romance and ‘suburban-gothic’ mystery, where past meets present to prove that secrets can’t stay buried forever.