'Head of the River' by Pip Harry 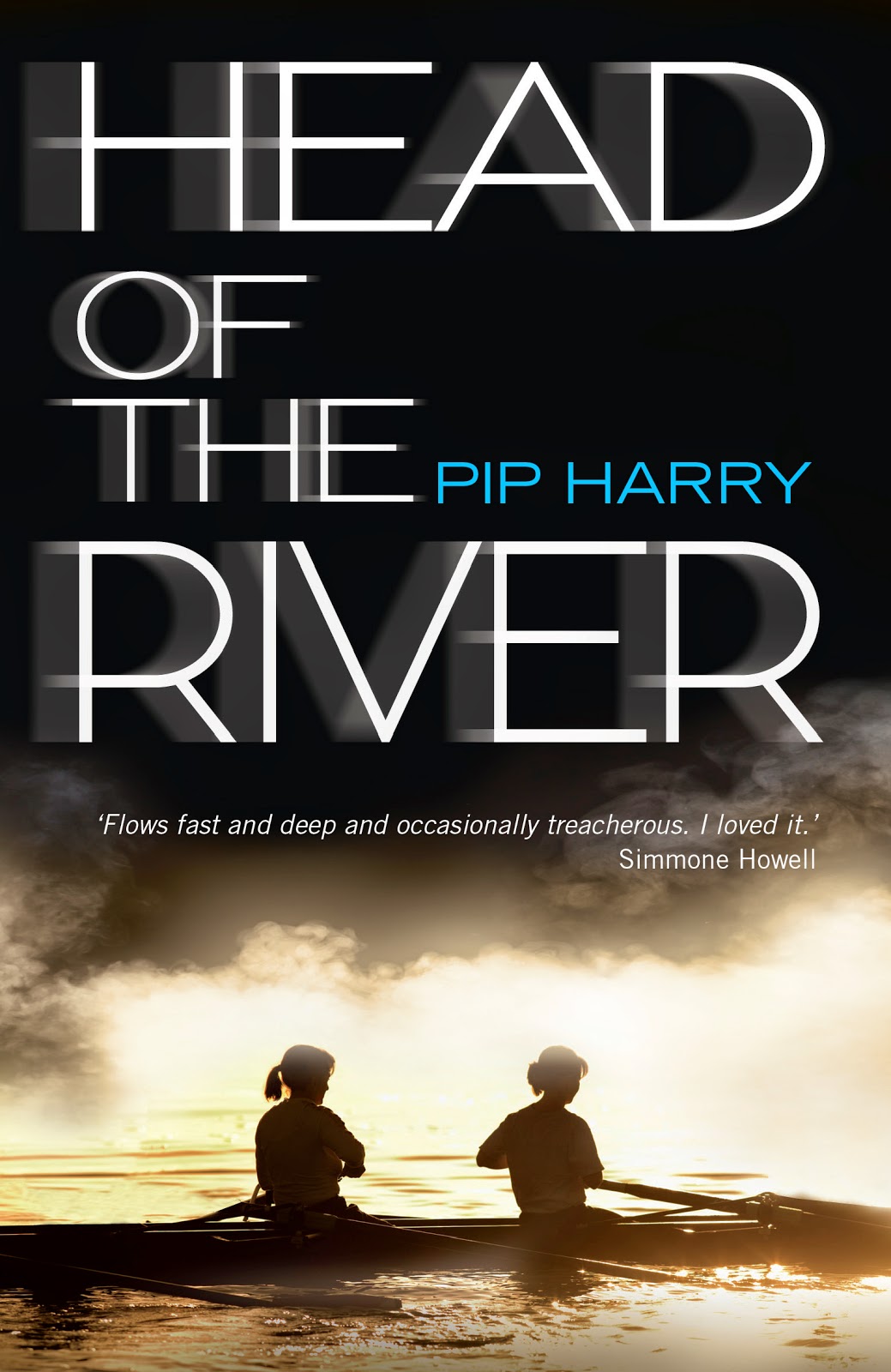 It's the most elite school sporting event in the country. Nine rowers, 2000 gruelling metres and one chance for glory in the ultimate team sport. Sit forward ... ROW.

Tall, gifted and the offspring of Olympians, superstar siblings Leni and Cristian Popescu are set to row Harley Grammar to victory in the Head of the River.
With six months until the big race, the twins can't lose. Or can they?

When Cristian is seduced by the easy route of performance-enhancing drugs, and Leni is suffocated with self-doubt, their bright futures start to fade. Juggling family, high expectations, study, break-ups, new relationships and wild parties, the pressure starts to build.

As the final moments tick down to the big race, who’ll make it to the start line? And who'll plummet from grace?

Two days after Head of the River and Harley Grammar is subdued at morning assembly; instead of singing ‘We are the Champions’ and back-slapping the rowing stars, the entire school is in a state of mourning for an unnamed but seriously ill student.

Meanwhile, Leni Popescu is in her own state of mourning and recovery after an accident. She’s at once scared for what her injury will mean for her rowing career, and worried about the same student her schoolmates are keeping vigil for.

Jump ahead and it’s six months to Head of River – back to where it all began.

Leni and Cristian Popescu are rowers for Harley Grammar and part of a proud rowing family. Leni and Cristian’s mum and dad were Olympic rowers – their dad a silver medallist and part of the Romanian eight, while their mum won gold as stroke for the Australian pair. Their parents met on the dance floor at the athlete’s bar at the Olympic Village in Seoul, and their dad migrated to Australia to wed their mum after a long-distance romance.

After years of gruelling early-morning starts, pulls on the ergo machine and fighting tooth and oar for a place on their respective crews, Leni and Cristian are getting ready for Head of the River – a Victorian rowing regatta that is the oldest continuous schoolboy (now girls too) rowing event in the world, dating back to 1868. To win Head of the River is to be a hero for your school. For Leni, especially, it’s a way to kick-start her Olympic rowing career.

But for Cristian, training for Head of the River this last year has been nothing but a prolonged soul-crushing. He’s not fit enough, as his coach revels in reminding him. A new boy, Sam, from the American school in Singapore has been at Harley Grammar for only a few months and rowing even less than that – but he’s being praised as a natural, and is breathing down Cristian’s neck for his spot on the first crew.

Through alternating chapters, we’ll see the six months leading up to Leni and Cristian’s Head of the River – the obstacles they face, mistakes they make and lessons learned through blood, sweat and Yarra River water.

‘Head of the River’ is the new contemporary YA novel from Australian author Pip Harry.

I have been excited for this book ever since I interviewed Pip Harry back in 2012, and she mentioned that her next book was going to be; “a YA novel which focuses on a brother and sister who are training for the Head of the River rowing regatta.” I was so in love with this idea for a number of reasons: the main one being how rare Aussie, contemporary YA sports novels (with male and female protagonists!) are these days. Another big reason for the excitement was the focus on rowing: because I was a rower. For one year of high school I donned a zoot suit, about killed myself on the ergo machines and participated in regatta after regatta after regatta. I’m not saying I was a good rower (my coach often yelled at me via her megaphone as she rode her bike along the bank that I had to “keep my head in the boat”, because I had a tendency to look at the passing scenery. What can I say? I’m more of a dreamer than a rower). So I felt an instant connection to this book.

Head of the River is one of the most prestigious school sporting events in Victoria. The event started out (back in 1868!) as a duel-style race between Melbourne Grammar and Scotch College on the Yarra River – and has now broadened to include boys and girls’ heats, and inter-school rivalries like you’ve never seen before. It is a big bloody deal, and Pip Harry has written about it brilliantly – blending the history, pride, and competitiveness beautifully with the very relatable stories of an ambitious sister and her down-trodden brother.

Pip Harry actually really plays around with gender roles in this book. It’s sister Leni who is the gung-ho competitor with her sights on Head of the River cup and a career, like her parents’, as an Olympic rower. It’s so refreshing to read a young female character with this kind of bull-headed drive. Sure, a big character arc for Leni is learning that it’s as much her friendships in the boat that have to matter as winning, but I loved her determination and machismo;

In the middle is a cut-out of the Head of the River cup, which I’ve coloured in with gold pen. I want it so badly it hurts. I like to touch the cup with my hand and imagine my bow girl going over the line first, thousands of people screaming on he banks of the Barwon River. Thinking about it gives me goose bumps. There’s a quote posted up that I think about during training: ‘Pain is just weakness leaving the body.’


By contrast, Cristian feels constantly dwarfed by his sister’s rising star. He’s not as good (or passionate) as Leni and their parents when it comes to rowing, and he feels the constant pressure to keep physically fit – particularly because he has a problem with temptation and portion control. Cristian is also seriously hung-up on one of Leni’s fellow rowers, a petite dancer called Penny who Cristian seems to continuously humiliate himself in front of;

‘Sure. But in rowing, you’ve got to learn to take the rough water with the glassy pond. Otherwise it will break your heart. Now show me your hands.’


But, as hinted in that opening chapter, stormclouds are gathering for brother and sister Popescu. Cristian’s negative self-image is leading him down a seriously dangerous path, and when Leni gets closer to the boy trying to steal her brother’s place in the boat, it causes a rift in their family.

Speaking of family, Harry explores the Popescu dynamics beautifully and it was something else I really related to. Their father is Romanian, and migrated to Australia to marry their mother – the kids sometimes feel embarrassed by his European attitudes and poor English-language skills, and even after so many years of living here their father still feels the brunt of being a ‘foreigner’. I loved the second-generation explorations, and just the fact that the family were so close – it was a double-edged sword in that Leni and Cristian really want to make them proud, but that put added pressure on them too.

I’ve also got to say that Pip Harry has the private school scene down. I attended a private all girl’s school, and I must admit that part of my wanting to be a rower was because I thought that particular sport had a certain cachet to it that I didn’t have otherwise, being from a very blue-collar, working-class background that was so different from many of my peers. I just thought Harry captured that world so damn well. In one scene particularly;


Instead of standing with the other parents drinking from plastic champagne glasses and eating dainty chicken sandwiches, my parents are tinkering with boats. They’ve been tinkering with boats my whole life. Dad’s adjusting the height of a rigger. Mum’s oiling a squeaky seat wheel. Dad’s the Harley Grammar boat caretaker, so he fixes, tunes and cleans all sixty boats in our fleet.

Mum has a smudge of grease on her cheek and she’s dressed in cargo shorts and an old T-shirt. I feel an itch of embarrassment. The other rowing mothers have white teeth and done-up hair, Broome pearls and designer jeans. The dads wear polo shirts and aviator sunnies. They carry long lens SLR cameras and the 'Saturday Age'.


Yep. That about sums it up.

‘Head of the River’ is a compelling and thoughtful contemporary Australian YA sports novel – that it has a brother and sister protagonist who don’t conform to gender stereotypes is also deserving of praise. But ‘Head of the River’ is also compulsive reading – with a plot that catches you like a crab and pulls you under. I loved it.