'Shimmer' The Rephaim #3 by Paula Weston 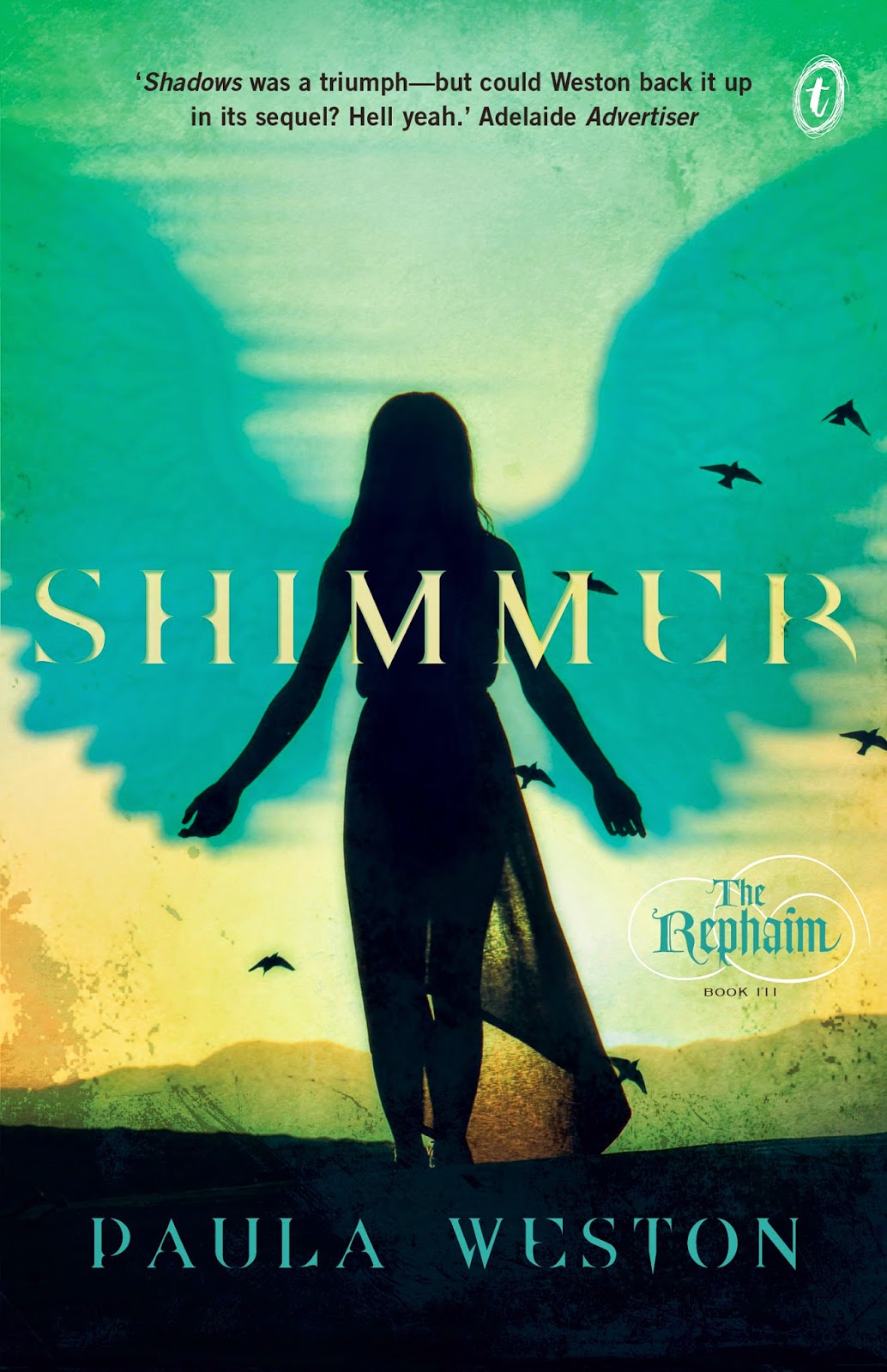 She's almost used to the idea that she's not the teenage backpacker she thought she was. She can just about cope with being one of the Rephaim—a 139-year-old half-angel—whose memories have been stolen. She's even coming to grips with the fact that Jude, the brother she's mourned for a year, didn't die at all.

But now Rafa—sexy, infuriating Rafa—is being held, and hurt, by Gatekeeper demons. And Gaby has to get the bitterly divided Rephaim to work together, or Rafa has no chance at all.

It's a race against time—and history. And it may already be too late.

*** Contains spoilers of second book in the series ‘Haze’ ***


When readers last left the world of ‘The Rephaim’ it was on a roller-coaster ride of mixed emotions: elation and devastation, cliff-dangling and hip-hip-hooraying.

Gabe/Gaby had just discovered that her twin brother, Jude, was alive. She and Rafa tracked him down only to discover he had suffered the same memory loss as his twin (who he also believed to be dead), and all of them still had a ways to go in discovering why Gabe left the Angel Garrison and Jude his Outcasts all those months ago – and who, exactly, wiped their memories clean so they couldn’t retrace their steps.

But Rafa and Gaby also discovered something else recently – a farm in Iowa belonging to a family who have seemingly been tracking the Rephaite for a number of years, who believe them to be abominations and want to see them wiped out. This Iowa community had gone so far as to design and build a magical room that was somehow able to hold Rephaite prisoner … and in the wrong hands, it could be lethal.

Gaby and Rafa also learnt that she and Jude have a cousin in Jason – the affable, curly-haired teenager from Pan Beach who has stolen the heart of Gaby’s friend, Maggie. Not only has Jason managed to keep his being a Rephaite secret from head of the Angel Garrison, Nathaniel, but he’s also been keeping an even bigger secret in the form of 12-year-old Dani, a little girl who can somehow see the future and is connected to the Rephaite in a most peculiar way….

‘Haze’ ended with the reunion of twins Gaby and Jude, a new source of information in Dani and the devastating battle that took place on the Iowa farm … resulting in the deaths of many humans, and the imprisonment of Rafa and Garrison loyalist Taya, in a room that has them trapped with Hellions.

Not to exaggerate, but it feels like I’ve been dangling over a cliff for the last 12 months, anticipating this third book in Paula Westons’s ‘The Rephaim’ series. And now ‘Shimmer’ is here I can safely say it was well worth the wait … but don’t expect to be let off the edge of that cliff anytime soon.

With Rafa and Taya imprisoned and at the mercy of Hellions, Gaby & Co. head to the Angel Garrison to all but plead for help. If they’re to have any chance of rescuing those two, they’ll need an army behind them and there just aren’t enough Outcasts to mount a successful attack. So Gaby and Jude are asking Nathaniel, for help – and waiting uneasily with the rest of the Garrison while he makes a decision. I so loved this set-up because it’s really the first time we’ve seen Gaby on her own, without the safety-blanket of Rafa. Sure, she has Jude now – but he’s got a lot more catching up to do filling in the pieces of his memory-loss. So, driven by a determination to rescue Rafa, we really get to see Gaby take shape as a leader in these trying times. Not only does she have to try and be diplomatic with Nathaniel and Daniel – leader and right-hand-suck-up of the Garrison – but she’s also got to keep loose-cannon, Mya, of the Outcasts in check and make sure the foot-soldiers from both sides don’t kill each other while they plan an attack against real enemies, the Hellions. It’s a volatile situation, and Weston navigates Gaby through it beautifully.

It’s also a situation that allows readers to get better acquainted with a few secondary characters who have sparked out interest in the first two books. The Garrison and Outcasts reveal their true colours during this highly emotional time, even more so because many of them are learning that Jude is alive – it’s even more fascinating seeing how characters react to him. The Outcasts treat Jude as their leader, and he seems to pick the mantle back up with easy aplomb. Many in the Garrison still feel the sting of his betrayal, and worry what it means that once-loyal Gaby/Gabe is back in cahoots with her deserting brother.

Two secondary characters I really fell in love with in ‘Shimmer’ are Micah and Daisy – they were on the periphery in ‘Shadows’ and ‘Haze’, known only as two of Gabriella’s closest friends, who were also close with Jude and Rafa before they abandoned for the Outcasts. In ‘Shimmer’ they’re fleshed out a lot more, Micah especially reveals a crushing back-story that speaks to the very tragedy of these Rephaite:


‘How does that fit with the lecture Daniel gave me about Nathaniel teaching the Repahim to “control the lustful desires,” of our fathers?’

‘Ah, now, see, there’s doctrine and then there’s reality. And it’s not realistic to think a bunch of supernatural beings eternally trapped in adolescent bodies with adolescent urges are going to keep their pants on.’


This is also the first book that readers are properly introduced to Jude – and now I can see why he’s already amassed quite a fanbase! But it was probably Daisy who intrigued me most of all – it’s been hinted in the past that she had a whopping big crush on Jude, and harboured a deep hatred of Mya for putting thoughts of desertion in his head in the first place. In ‘Shimmer’, after the initial elation of learning that Jude is alive, readers are then able to see her revert back to past grievances with Gaby’s charismatic twin. I guess I really loved Daisy because, even though she is very much secondary in this book, Weston builds enough intrigue and back-story to have me craving more and wishing (hoping, finger-crossing!) that this series won’t end with fourth book ‘Burn’ in 2015, that we’ll get a Jude spin-off (or short stories?) … and all because Weston masterfully leaves breadcrumbs to his connection with characters like Daisy;

‘Wow. It’s been a while since you used that look on me.’

‘The one that says: “Daisy, don’t let me down.” That stopped working the day you followed Mya out the door.’

She doesn’t look away and neither does Jude. I shift my weight, force myself to stay out of it.


I also really loved Daisy because I could relate to her motivations. While everyone else is very firmly entrenched in their Garrison or Outcast camps, Daisy feels torn between her friendships and loyalties, and a craving for a sense of belonging;


‘We could’ve used you and those twin-sided sais in Iowa,’ Jude says.

Something crosses Daisy’s face – regret? ‘I’m not like you: I like having a home. Not all of us can get away with defying Daniel.’


I think ‘Shimmer’ is setting up much more of the Angel politics and the long-game ending for book four. There’s also plenty of action (fist-thumping, lip-splitting, sais-wielding action!) but I really loved the down-times in this book too, when we get to know the secondary characters better and see Gaby and Jude handle themselves in this new/familiar environment.

And, of course, it wouldn’t be ‘The Rephaim’ series without some seriously sizzling romance. You guys – I can’t even with this book. I’ll only say that the fans will be very, very happy indeed.

Paula Weston has done it again. ‘Shimmer’ is another stellar instalment in this, the best Angel-themed paranormal series I’ve ever read, and it’s so much heart-palpitating fun that I don’t even mind being led back to that cliffhanger rock-face again for the ending. 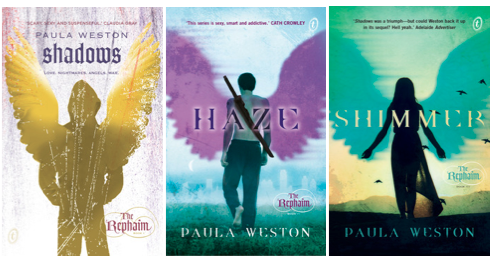