'The Minnow' by Diana Sweeney 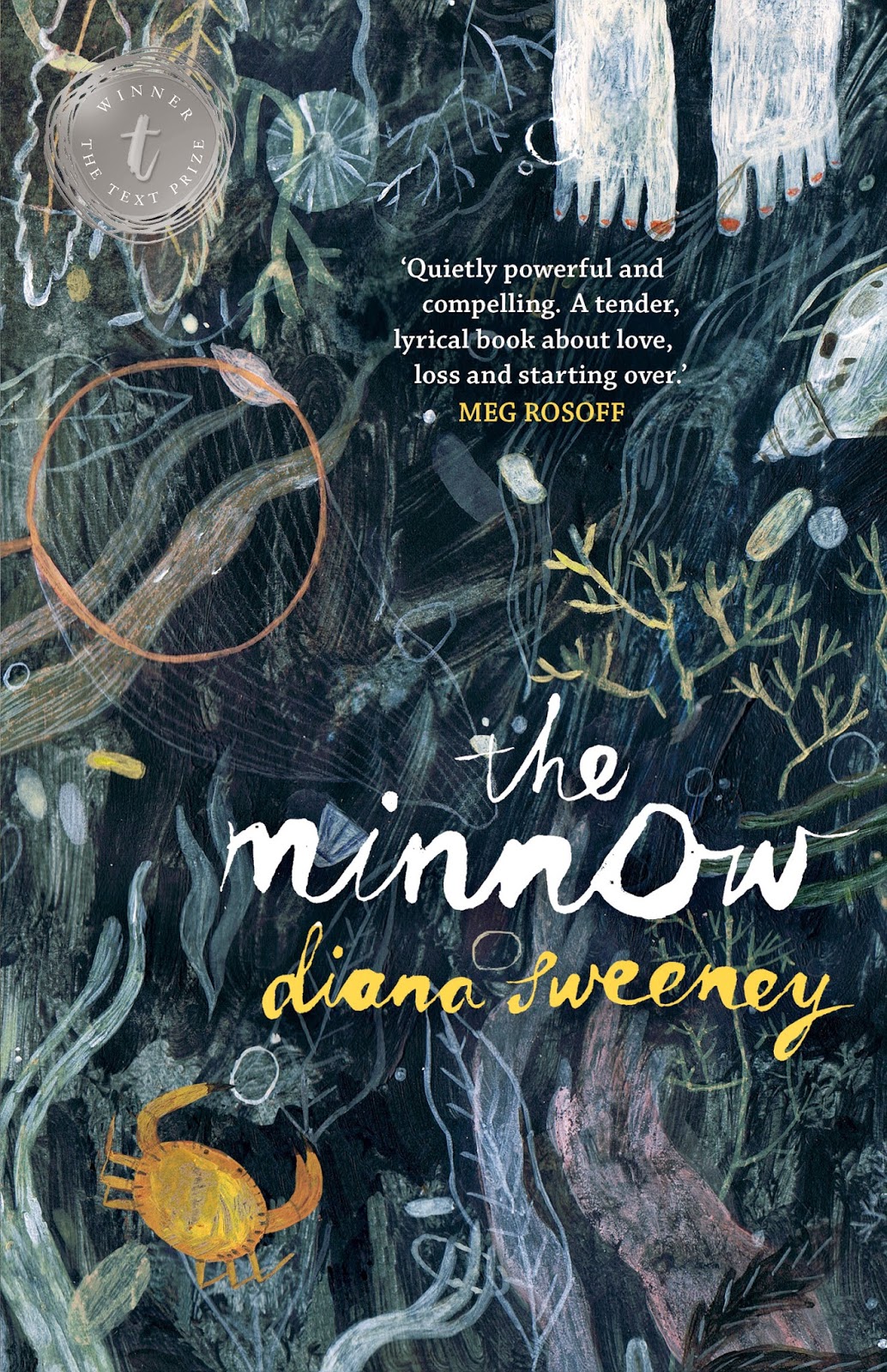 Tom survived a devastating flood that claimed the lives of her sister and parents. Now she lives with Bill in his old shed by the lake. But it’s time to move out—Tom is pregnant with Bill’s baby.

Jonah lets her move in with him. Mrs Peck gives her the Fishmaster Super Series tackle box. Nana is full of gentle good advice and useful sayings.

And in her longing for what is lost, Tom talks to fish: Oscar the carp in the pet shop, little Sarah catfish who might be her sister, an unhelpful turtle in a tank at the maternity ward. And the minnow.

The Minnow is a moving and powerful coming-of-age story with a whimsical element that belies the heartbreaking truth of grief and loss. Tom is a character you will never forget.

Tom is 14-years-old. She lives in The Crossing, a small coastal town that recently experienced devastating floods. Tom’s Mum, Dad and sister all died and she has been living with Bill ever since. Now she finds herself pregnant with Bill’s baby, and caught in the middle of his shady business, which is gaining the interest of the local police.

So Tom moves into her best friend Jonah’s house – Jonah’s parents also died in the floods, and he’s happy to take care of Tom if it means getting her away from Bill.

While the baby grows in her belly – and takes on the persona of ‘the minnow’ – Tom goes about her life; visiting her Nana in the nursing home, talking to the ghost of her dead grandfather Papa and fishing when the mood takes her.

But grief is always there, waiting to bob to the surface and reel Tom back in.

‘The Minnow’ is the debut young adult book from Diana Sweeney, and winner of the 2013 Text Prize for Young Adult and Children’s Writing.

By now nobody should be surprised that the Text Prize is producing some of Australia’s finest young adult and children’s writing. But here I am, gobsmacked yet again that this Prize has unearthed such an original, tender and downright unique work as ‘The Minnow’ from debut novelist Diana Sweeney. I can honestly say, with hand over my heart, that I’ve never read anything quite like this disarming and haunting novel – I kept trying to think if Sweeney had echoes of Isabel Allende’s magical realism, or A.S. King’s subversion with perhaps literary touches of Karen Russell. But I have come to the conclusion that Diana Sweeney simply writes like no other – she is a wholly unique and welcome new voice to Australian youth literature, and ‘The Minnow’ is a majestic debut.

Sweeney tells Tom’s uncomfortable and tragic story of becoming orphan and pregnant to a much older man, but cloaked in beguiling prose and almost with vignette-like flashbacks. When we meet her, Tom is fourteen and indeed an orphan – having lost her Mum, Dad and sister to the floods a few months back;

The last time I saw Sarah she was floating head down with her arms and legs out from her sides like a star fish. I watched her from the roof of the fire station, counting the seconds. She held the record at fifty-two. I counted to sixty as she disappeared around the side of the newsagent. I remember thinking she was probably sneaking a breath.

She has been living with an older man called Bill – we don’t quite know how much older (though can assume it’s considerably) or how she came to be sleeping in the loft of his shack house. But when we meet her, Tom finds herself pregnant with his child after a one-off liaison and in need of her (two-years older) friend, Jonah’s, help for new accommodation when Bill’s extracurricular activities see him fleeing from the police.

As the baby grows inside her, Tom starts referring to the tadpole as ‘The Minnow’ and the two have frequent conversations and sometimes disagreements during the incubation.

Tom also visits the local pet shop and carries on thoughtful conversations with Oscar the Carp and Sarah the Catfish. Not to mention the vital relationship she has with her Nana, who lives in a nursing home, and her grandfather Papa – who died a long time ago but insists on haunting Nana, for he never stopped loving her.

Yes, these little asides with her dead Papa, growing baby and various forms of marine life are strange and certainly a nod to magic realism. But they’re not jarring or so disorientating when Sweeney’s entire story is about the ‘after’ of tragedy – when nothing ever feels right or normal ever again. And Sweeney is exploring devastation so beautifully, with such tender understanding and sparkling prose, that the reader can hardly begrudge Tom the friends and family she has amassed around her – real or imagined, living or haunting. She is fourteen-years-old and has experienced too much pain before her time, she is wiser for it but still a young girl navigating uncertainty and hurt.

And the flights of realism never feel so out of place because Sweeney’s writing captures them so perfectly to orientate the reader. Her words are at once sparse but beautifully constructed; she has the rhythms of a true storyteller so that I found myself finishing the book in a day without ever really feeling the passage of time. Her pacing is particularly impressive, for how she says so much with so little. We get a few flashbacks, for instance, that can run the length of a paragraph but feel like a fulfilling vignette for how much detail she manages to cram into the more infinitesimal of memories:

Sarah and I hardly ever played hide-and-seek. Mum said it was an unfair game because Sarah always ended up in tears when she couldn’t find me. I absolutely loved hiding and it never bothered me if Sarah wouldn’t play, because I had just as much fun hiding on my own. Dad said I could hide in plain sight. I’m not sure how I did it, but I could stand flat against a wall and Mum would walk straight past and not notice I was there.

It took a few years of practice – and a lot of help from Papa – to hide from Dad. Papa said Dad’s army training was our biggest hurdle. I tried asking Dad about it once, but he just walked away from me.

I will say that I felt Sweeney was gathering storm-clouds and foreshadows as she made her way to the end, but when we finally got there I found myself wishing it had been tighter, maybe clearer and perhaps a chapter or two longer?

This books sticks with you – is it too much of a cliché to say ‘hook, line and (golden) sinker?’ Here is a book unlike any other on the YA shelves today. On the one hand it is dark and bush gothic, but also with a sense of whimsy and lightness. Tom is a protagonist too young for such tragedy but all the more interesting for how she has survived, and is still surviving, in the wake of it. Diana Sweeney carries you under with this story that is full of death and ghosts but with a deftly surreal touch and haunting prose … I want to read more from her, and soon. 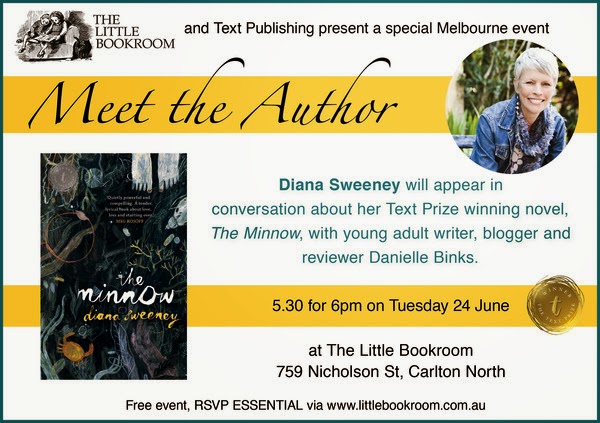 Book here
Posted by Danielle at 9:00 AM