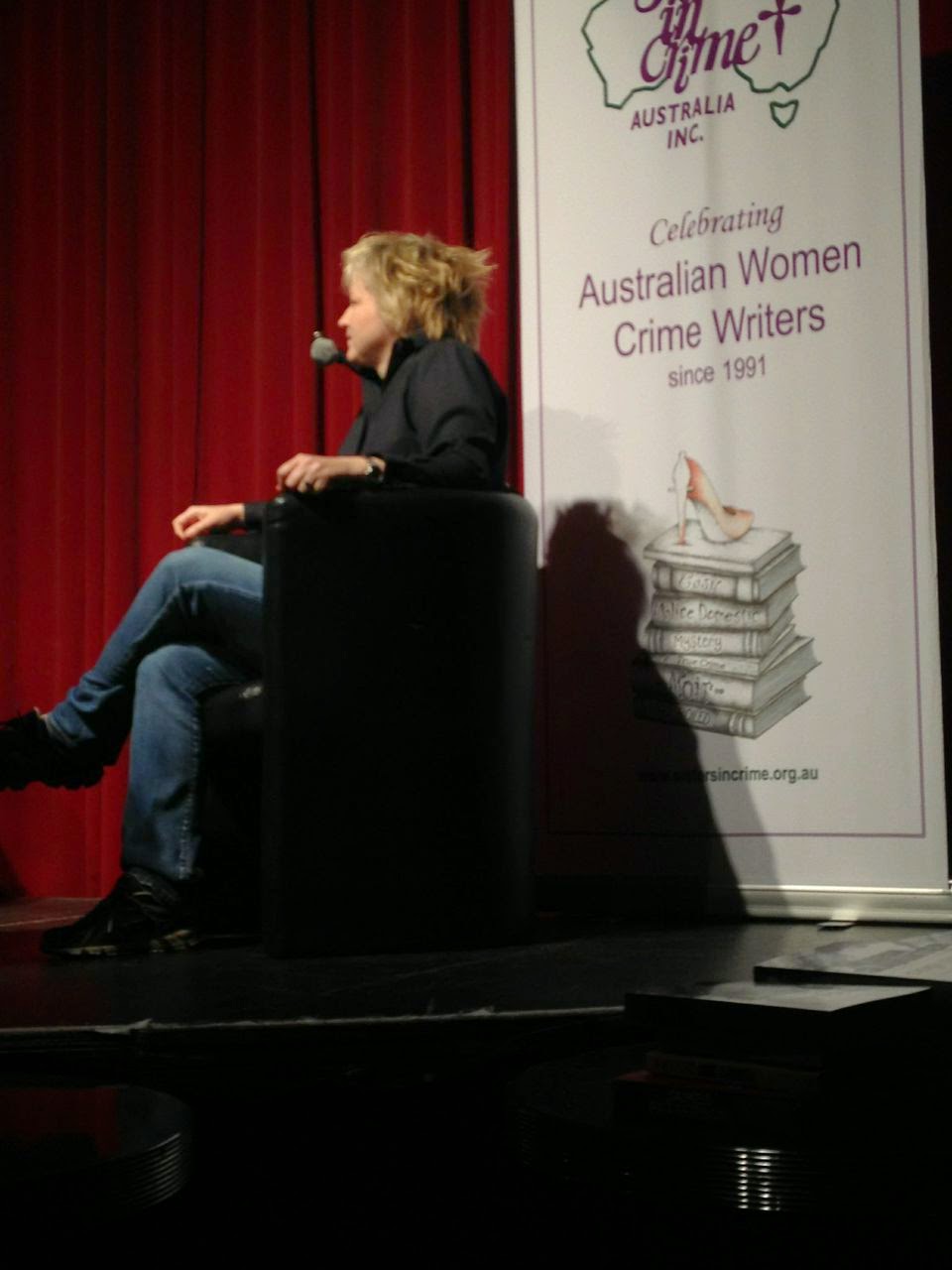 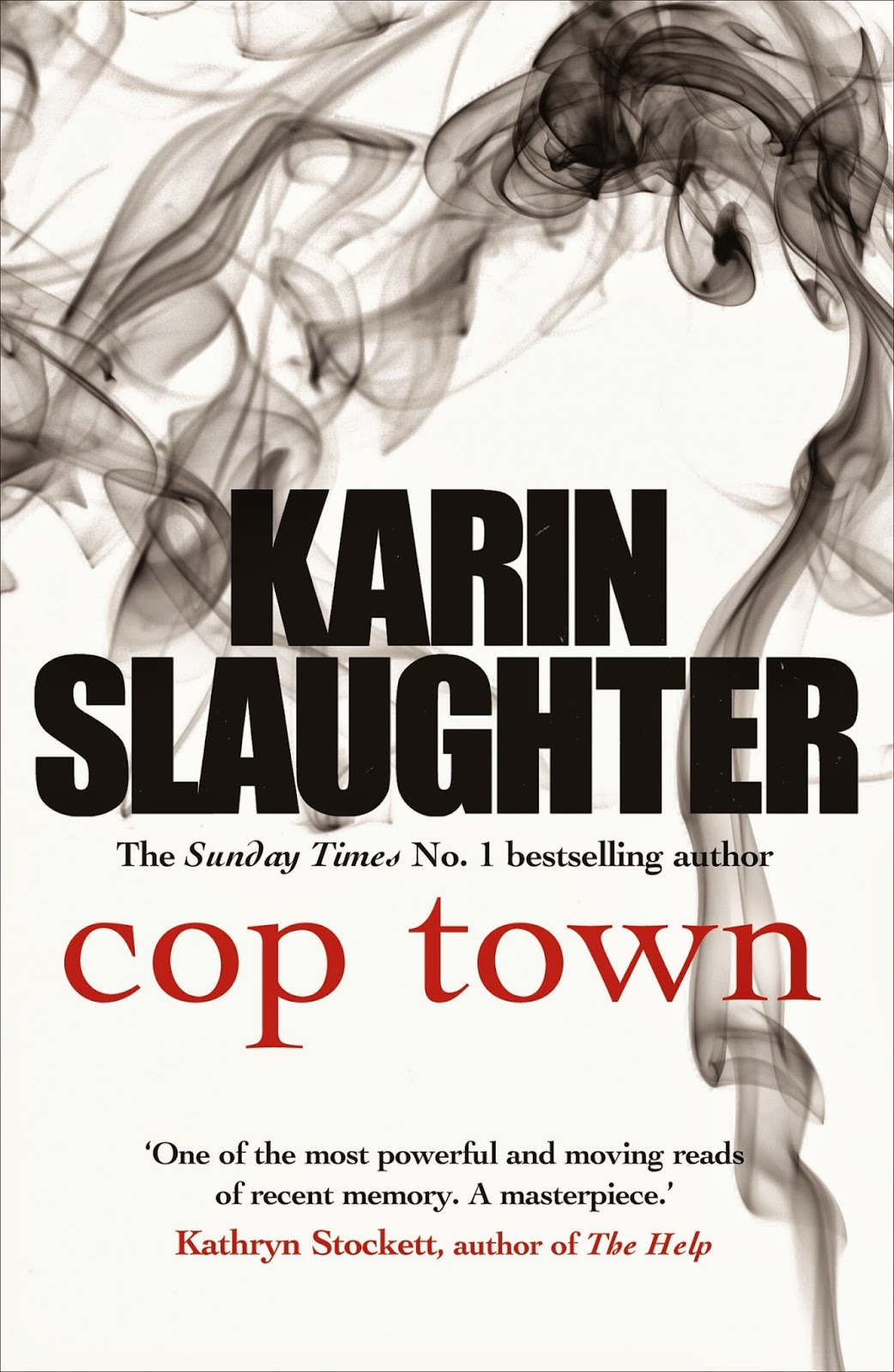 The other night I attended crime writer Karin Slaughter’s only Melbourne author event, hosted by Sisters in Crime Australia at the Melbourne Athenaeum Library. Slaughter was in conversation with Australian true crime author Vikki Petraitis.

If you frequent this blog then you’ll know that I’m a HUGE Karin Slaughter fan. She’s the only crime writer I read religiously and is responsible for even getting me interested in crime fiction in the first place – so this was a big event for me, meeting a literary favourite.

What really struck and stayed with me from this ‘in conversation’ was just how gosh-darn funny Ms Slaughter is (and her southern accent is charming). Sure, the ‘Grant County’ and ‘Will Trent’ books have a wry wit to them and definite dark humour, but Ms Slaughter was pretty hilarious – ranging from crude jokes to swift uppercut sarcasm. And, despite her name/genre, she is very charming and humble.

Here are some dot-points I made from the ‘in conversation’. These are all from memory, as I was too wrapped up in the talk to jot down notes or live tweet – so if there are errors, I do apologise.


·   ◙ Vikki Petraitis asked Slaughter about her childhood growing up as a reader. Slaughter noted that her father wasn’t big on books – mainly because he grew up poor and there was no time. But he was a storyteller – the type of moralistic tales that end in a child’s death (if they left the fridge door open, etc). Her grandmother was also a good Southern woman who knew everyone’s business, but thought it rude if people asked about hers – Karin heard all town gossip from her grandmother, another natural storyteller.

· ◙   Slaughter said that when she was a teenager she read, as all teenagers do, “absolute crap.” She read ‘Flowers in the Attic’ (never making the incest connection, thinking it was a lovely romance) and ‘Lace’ – all the usuals. Her niece went through the ‘Twilight’ phase, and she’s thankful she didn’t have that kind of crap growing up. Slaughter pointed out how horrified she was that in the books, Bella is nearly killed while having sex with Edward for the first time … but it’s okay, because they’re married and he loves her (what kind of message is that sending girls?). Also, something Karin can’t understand in all these supernatural books; “why would a vampire choose to go back to high school?”

·  ◙   Petraitis made two interesting observations: #1 Karin Slaughter worked as a sign-writer for some time, and it’s the only sign-writer in town who Jeffrey has an affair with – Petraitis asked if there was a hidden message or joke in that, to which Slaughter replied that was her putting distance between her old self, and carving out a place for herself as an author. #2 big ‘Wuthering Heights’ fan – to the point that lots of names are stolen from the book (um, Linton – hello? How did I not see this before?) Slaughter actually said people never pick up on that. 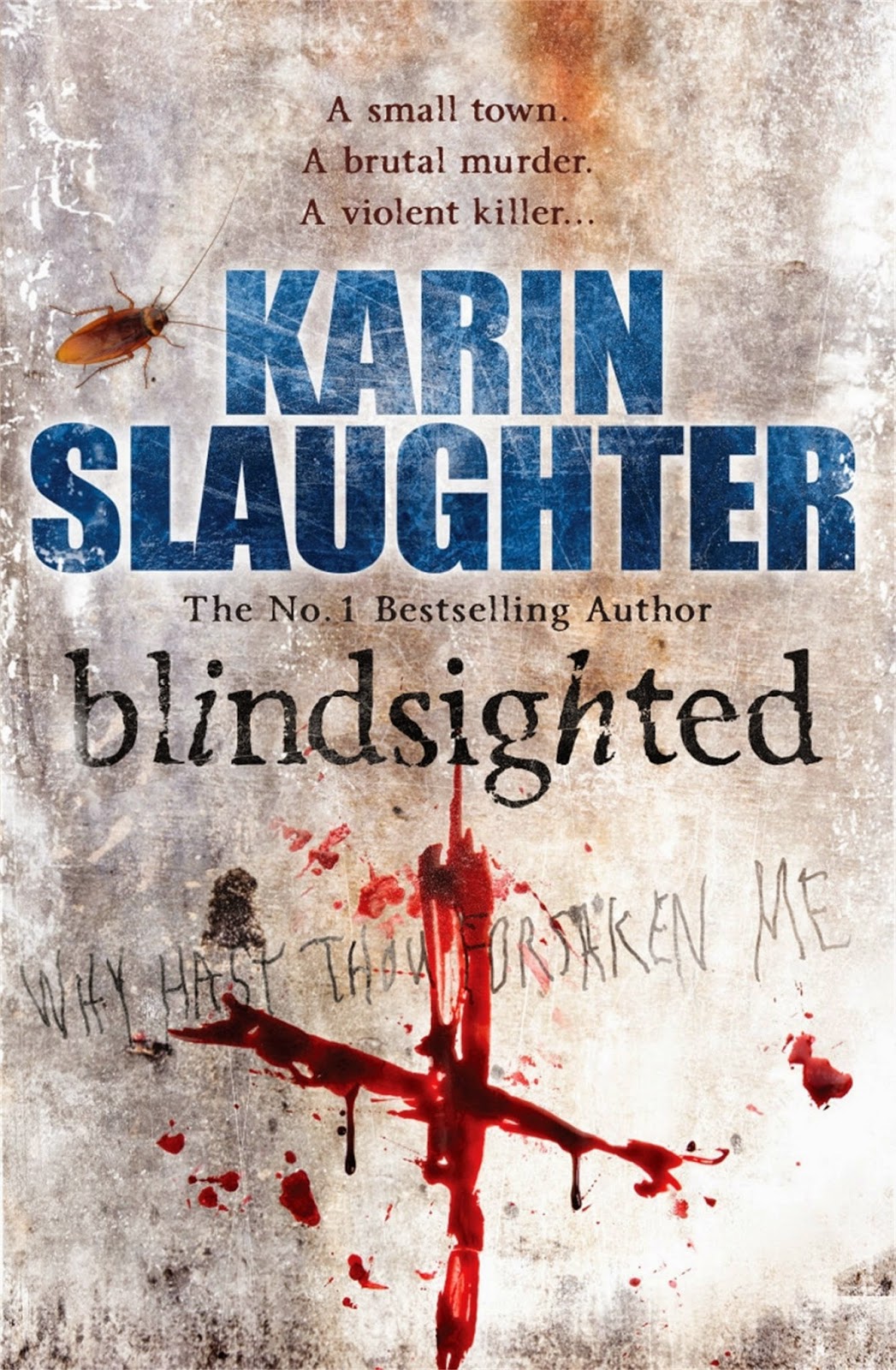 ·  ◙  Asked if she watches the News and reads the papers to look for crimes and true stories to use in her books. Slaughter acknowledged that she does get ideas from real life (and, luckily for both authors, people keep doing terrible things, that keeps crime writers in business – said with heavy sarcasm). But she stressed that she’d never take something from real life completely – she doesn’t want to exploit someone’s worst day. She more relies on a law in Georgia (‘sunshine law’?) that means once a case is 20 years old, any citizen can request all court documents of that case – for the cost of photocopying. So she has folders and folders of old cases that she trawls through.

·   ◙ Talk veered toward quality control, and certain crime writers (who shall remain nameless) who have been writing for a looooong time, but their series are getting worse … now over-populated with Mary-Sue protagonists, no real emotional friction and too many lucky coincidences (an example was given of a coroner who just so happened to have scuba gear in her trunk when she discovers a body in the lake...) For Slaughter, her big aim as a writer of ‘whodunits’ is to always make the reader go “Oh! Of course!” not, “What the fuck?” and she always sets out with the aim to write a better book than the last one. She also loves her editor (who has been with her since book #2, no longer works at the publishing house, but still edits Slaughter’s books) – she pushes Slaughter and questions her, and they have a good working relationship partly because they grew up in the industry together.

·  ◙  On quality control: Slaughter also noted that the bigger you get as an author, the more you tour. So it’s probably hard for writing when you have to be out of the country for so long on promotion, but then still come home and churn out one book a year. She also made the statement that male authors tend to love touring (people telling them how great they are) but she’s observed that female authors go out touring and become plagued by self-doubt.

·  ◙    Petraitis also noted that Slaughter is different from a lot of male crime writers – who tend to favour cranky, middle-aged white guy protagonists, who don’t appear to have any charm whatsoever (“yet everyone wants to give them a blowjob?!” Slaughter noted – to raucous laughter). I thought this was an interesting line of questioning – and it got Slaughter talking about the women she writes and why they’re fascinating to her. She made a note of Lena – who many fans tell her they absolutely hate, “as if I accidentally wrote her that way?” Slaughter said. No, in fact she set out to make Lena a tough character to like – someone who you alternately want to slap, and then shake and say; “you’re better than this!” Because Slaughter is fascinated by (and all women in the audience understood this) the fact that, as nasty as girls can be to each other, it’s nothing compared to the self-hatred they can inflict.

·   ◙ Another reason Slaughter writes tough women – her grandfather was a terrible father (the Klan – KKK – kicked him out for not looking after his family. “Like they had such great standards?” Slaughter quipped) and her father grew up watching his mother be beholden to this tyrannical man. Slaughter is one of three sisters, and their father really instilled independence in them because he saw what happened to a woman when they only had men to rely on. Slaughter said between her mother and father, she was given a typical “southern education – dad taught me to change a tire, mum taught me to flirt so I wouldn’t have to.”

◙    Asked who she imagines in the movie/TV adaptation of the ‘Grant Country’ and ‘Will Trent’ series. Slaughter said she always pictured Harry Connick Jr as Jeffrey (bit of a chuckle, I think showing her southern alliance) when she started writing Sara she pictured Cate Blanchett, but as she started out a while ago Blanchett has aged (as we all do) so isn’t quite Sara anymore. But she said there’s really no one else like Cate Blanchett to replace her in her mind – no new crop of actresses really come close. And for Will she thinks Alexander Skarsgård has the right look … but he’s too damn cocky to play Will (“he’s hot, and he knows it.”)

·   ◙ As for adaptation of either series … the production company behind ‘Girl With a Dragon Tattoo’ have the rights to 'Will Trent' and a script is being written. Slaughter prasied the ‘True Blood’ adaptation of Charlaine Harris’s books, and Tess Gerritsen’s ‘Rizzoli & Isles’ series – saying both series did their own interpretation of the books to some extent, and she thinks that’s what an adaptation should be – changing to suit the medium. No word on timelines, but they’re working on the script (!!!!) It's a bit unclear, but from the sounds of it only 'Will Trent' is in the works, since Slaughter only mentioned Yellow Bird Production. Entertainment One have the rights to 'Grant County', but she didn't talk about them.

·   ◙   On the matter of Jeffrey “going to the letterbox” (as Petraitis put it, to avoid spoilers) … Slaughter only said that it occurred to her that Sara and Jeffrey were getting too happy, and that was boring. She also wanted to start writing outside of Grant County – didn’t want it to become like the town in Midsomer Murders where you can’t understand why people still want to live there, what with all the rapes and murders. That's partly why Will works for the Georgia Bureau of Investigation - he can travel around a lot more.

·   ◙ She said that when she created Will Trent, she knew he’d one day meet Sara, so she wrote ‘Triptych’ and ‘Fractured’ with the aim to mould Will into the sort of man Sara would be interested in … which is why he has Amanda and Faith, helping to pull his armour down a bit and readying him for a meeting with Sara in ‘Undone’. 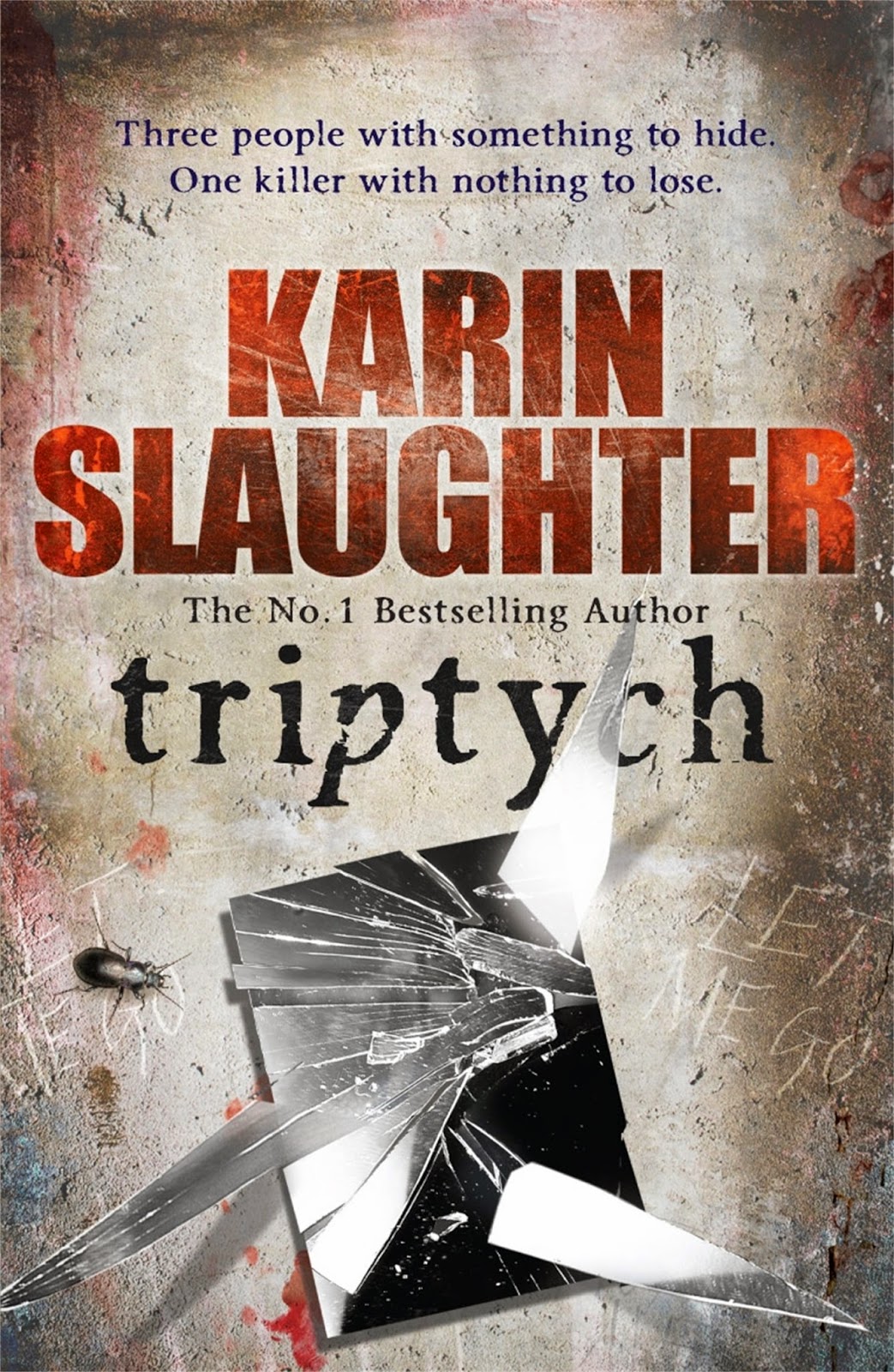 ·  ◙    What will the next ‘Will & Sara’ book be about? … Slaughter said she’s going to answer a question that she, and lots of readers have, which is “where does Angie go when she’s not with Will?”

·  ◙ Slaughter said she also has an idea for a “not-cop” book. Hmmmmmm

·  ◙    About her new book ‘Cop Town’, Slaughter discussed the interviews she did with female officers who worked during the 70s. She noted that all of them made the decision to join the police force because every single one of them had been told some variation of “you can’t do that.” One woman whose husband forbid her from joining the force retired as a captain, and is now a consultant for the FBI (and the best natural storyteller Slaughter has ever met).

· ◙     Someone in the audience asked “Why always Georgia?” and “what’s the fascination with the 70’s?” On Georgia: Slaughter sees herself as a bit of an ambassador for the state, which is very misunderstood by the rest of America and subject to stereotype. She wanted to champion some things, like the fact that Georgia has the largest African-American middle-class, and elected the first two black mayors in American history (who also championed racial integration in the police force, and women on the force too). As for the 70s? – it was a time when prejudice, in all forms, was out in the open but accepted. Slaughter told the story of her father (then in his early 20s) having to co-sign a home-loan with his single mother (then in her 40s) because in the 1970s women couldn’t own credit cards or take out loans without a man to co-sign. That fascinates her.