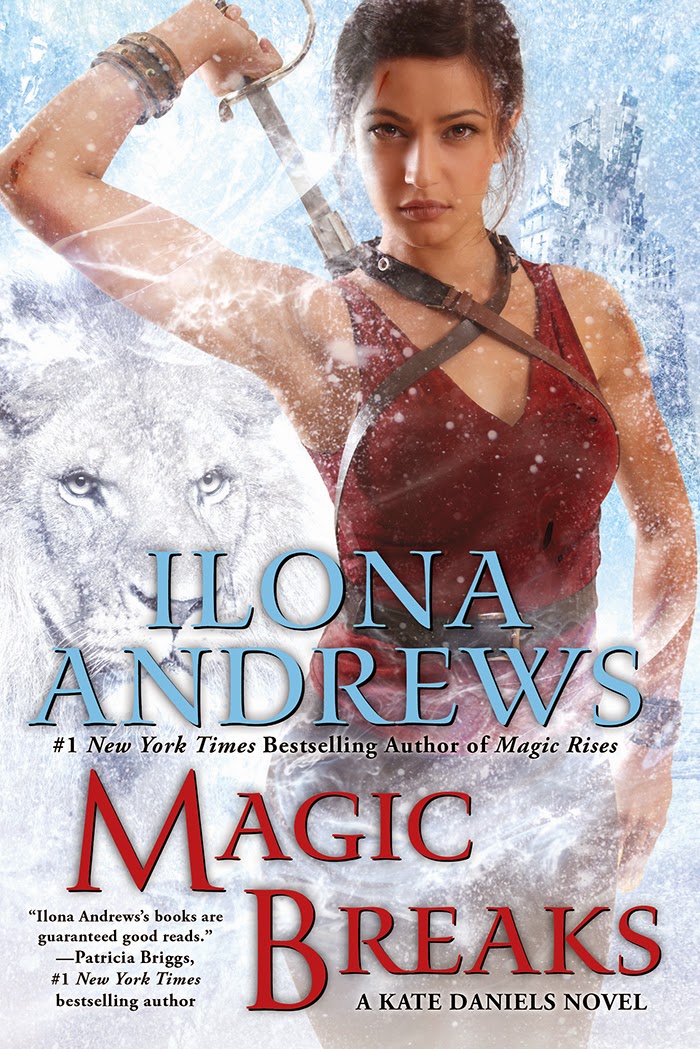 No matter how much the paranormal politics of Atlanta change, one thing always remains the same: if there’s trouble, Kate Daniels will be in the middle of it…

As the mate of the Beast Lord, Curran, former mercenary Kate Daniels has more responsibilities than it seems possible to juggle. Not only is she still struggling to keep her investigative business afloat, she must now deal with the affairs of the pack, including preparing her people for attack from Roland, a cruel ancient being with god-like powers. Since Kate’s connection to Roland has come out into the open, no one is safe—especially those closest to Kate.

As Roland’s long shadow looms ever nearer, Kate is called to attend the Conclave, a gathering of the leaders from the various supernatural factions in Atlanta. When one of the Masters of the Dead is found murdered there, apparently at the hands of a shapeshifter, Kate is given only twenty-four hours to hunt down the killer. And this time, if she fails, she’ll find herself embroiled in a war which could destroy everything she holds dear…

‘Magic Breaks’ is the seventh book in the urban fantasy ‘Kate Daniels’ series, from husband and wife writing duo Ilona Andrews. In an author letter at the start of the book, Ilona Andrews highlight that in this book a huge story arc is coming to a close, while another one is just beginning – stressing that #7 is not the final book in the ‘Kate Daniels’ series (they’re contracted up to #10).‘Magic Breaks’ starts shortly after ‘Magic Rises’ – Kate is preparing from the fallout of Hugh d'Ambray reporting back to her father, the powerful Roland, with news of her whereabouts. She’s plagued by guilt and nightmares over the death of Aunt B, while also putting on a good show as Consort for Beast Lord (and fiancée) Curran, who has a lot of wheeling and dealing to do since obtaining control of the Lyc-V cure Panacea. When Hugh finally shows his hand and makes his next move, the implications are devastating – an orchestrated war between the Pack and the People that Kate can’t see any way out of without involving Roland.Ok. So. I’ve given this book a 3-star rating, and it’s something I’m still wrapping my brain around, even while I think I can justify the so-so rating. Because here’s the thing: I liked this book. I really, really did … but I expected more. More fallout, more heartache, more tough choices … just *more* and I think Ilona Andrews weren’t as ruthless as they needed to be. Let’s be honest – ‘Magic Breaks’ is the book. The one we’ve all been waiting for since first meeting Kate way back in ‘Magic Bites’ and being curious as to why this woman felt the need to be alone, to anticipate a bloody battle that would one day come, to hide in plain sight … this is that book. This is the book where the long game plays out, where the plot that Ilona Andrews laid groundwork for back in 2007 comes to a head. At the start of the book there’s a write up ‘From the Journal of Barabas Gilliam’, which both acts as a summary of past events and gives a deep sense of foreboding for what lies ahead…

There is a storm gathering on our horizon. We will make a stand, but I wonder if it will matter in the end.

Because everything has been leading to this moment – Kate facing off against Roland. He’s the big bad who has been built up as a God-like entity, with possible biblical origins and a devious mind – apart from trying to kill Kate when she was in the womb, and murdering her mother when that first plan didn’t succeed, Roland created the psychotic likes of Hugh d'Ambray and is responsible for the very magic world the Kate Daniels universe is set in. He’s a big freakin’ deal, as has been built up and established for six books now … I imagine fans going into this book are expecting bloodshed and hard choices, on behalf of Ilona Andrews and by extension – Kate. We know that her character journey has been from loner to responsible for a whole Pack of people (some of whom she loves dearly, others who’d like to see her die promptly) so it makes sense that at the culmination of that journey all she has become and established will be risked.Except it’s really not. The hardest death Kate witnesses in this book is someone from her past who I can barely remember, and whose connection to Kate has to be reminded and established in lengthy paragraphs because we haven’t seen them for a few books now … it hurts her, don’t get me wrong, but it’s a glancing blow compared to some of the other characters who could have been sacrificed. I was all ready to have my heart torn out in this book – such is the cunningly ruthless writing I’ve come to know and expect from Ilona Andrews – but it never comes. There are near-misses, but no real casualties to hurt and impact readers. And that’s a problem for me. I’m not saying I wanted mass-slaughter of everyone’s favourite secondary characters, but when the build up has been so big the pay-off needed to match – and it just didn’t, I’m afraid. On two occasions Ilona Andrews came close to breaking readers hearts, but they pulled back. It’s like pulling a punch, in my opinion. On the one hand: yay! No sacrifice, no beloved characters to mourn. On the other hand … now that a new story arc has been set up that’s meant to topple the previous one for Big Bad, I’m not sure how convinced I am that they can pull it off. As a reader, I really don’t think there’s anything at stake. So, there. That’s my reasoning. I think the lack of ‘Kill Your Darlings’ ruthlessness made this a fairly light-weight instalment, when it should have been The Book it was built-up to be. I think I’ll be in the minority in this reasoning, but hopefully people can at least acknowledge where I’m coming from.Another issue for me was the lack of Julie. Also at the beginning of the book there are character profiles, and when I read Julie’s is struck me all over again that she’s being set up to become a protagonist in her own right;


Julie: she has a crush on Derek, who sees her as a little sister, and an adversarial relationship with Ascanio, who views her as a rival and potential romantic conquest … Julie had been infected with Lyc-V, the shapeshifter virus, and was going loup. Kate used one of her father’s rituals to save Julie’s life by washing her blood with her own, which bound Julie to her. Julie is unable to refuse Kate’s direct order, a fact that Kate and Curran hide from her.

There’s just so much material there to play with, and I was excited to see how Julie would fit into the big storyline of ‘Magic Breaks’. Except she doesn’t … she has a couple of scenes, and Kate *talks* about her a lot, but that’s it. Really disappointing, because it felt like Ilona Andrews pulling more punches and avoiding writing the tough stuff (she’s the last person I want to read die, but being so young and human, not to mention bound to Kate, Julie is the most vulnerable … so I wonder if shuffling her off-screen was a way to avoid hard decisions where she’s concerned).The lack of Julie also grated because ever since reading the ‘Magic Tests’ young adult short story, which appeared in the anthology ‘An Apple for the Creature’ (and is provided in ‘Magic Breaks’ as an extra at the back of the book) I’ve thought Julie needs her own spin-off. Maybe not YA, but definitely when she’s older Julie is interesting enough to hold her own. I asked this of Ilona Andrews last year, and this is what they said:


A: We've talked about it. We would like to write an older Julie, maybe a love triangle between her, Derek and Ascanio. Lately though, my money is on the dragon guy. We're not YA writers though, and it might not work as well as we'd like.

The lack of Julie is even more frustrating because, really for the first time in a long time, Derek and Ascanio have scenes together … and they’re funny!


“Okay.” Ascanio took a step back. “I understand you need a moment.”

“Would you like me to beat him?” Derek asked.

“Personally, I don’t think this is a good time to be fighting among ourselves,” Ascanio said. “But if Mr. McBroodypants would like to see how much I’ve learned in the past year, I’d be happy to show him. It would make a lot of noise and draw a lot of attention with all the blood flying around.”

They’re developing such a great antagonism, that I really wanted to throw Julie into the mix to see what happened.


“I can give it a shot,” Ascanio offered.

“Don Juan Wannabe,” Derek explained. “See, I shortened it. If you still don’t get it, I’ll write it down for you after the fight.”

“You’ve maxed your wit quota for the night,” Ascanio said.

Derek and Ascanio were probably my favourite part of the whole book, which is itself an issue. Their comedic scenes were all that I really *loved*, which isn’t great in a book that’s meant to be a huge climax to the over-arching Big Bad story thread.I mean, sure, I loved the Kate and Curran stuff too – especially that a lot of the book is Kate handling things on her own without relying on Curran overmuch. And, yes, I think Hugh d'Ambray is a sadistically great villain who I really enjoy reading. I’m excited about the set-up for books #8, #9 and #10. But I do think that Ilona Andrews pulled punches in ‘Magic Breaks’, and handled their readers with kid-gloves a little too much. I’m desperate for Julie to be given more to do, and by extension to see Derek and Ascanio grow up more alongside her (and, oh my god! I want that love triangle to play out SO BAD!). The fact is, ‘Magic Breaks’ was okay … but it could have been great.