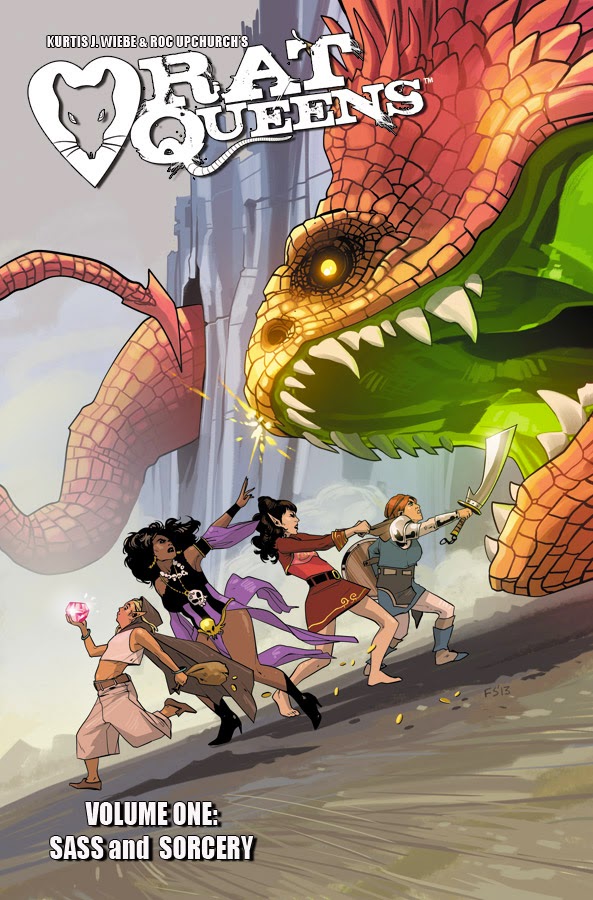 Who are the Rat Queens? A pack of booze-guzzling, death-dealing battle maidens-for-hire, and they’re in the business of killing all god’s creatures for profit. It’s also a darkly comedic sass-and-sorcery series starring Hannah the Rockabilly Elven Mage, Violet the Hipster Dwarven Fighter, Dee the Atheist Human Cleric and Betty the Hippy Smidgen Thief. This modern spin on an old school genre is a violent monster-killing epic that is like Buffy meets Tank Girl in a Lord of the Rings world on crack!

It was only in November 2012 that I discovered the series that awakened me to the wonderful world of comics: ‘Saga’ by Brian K. Vaughan and Fiona Staples. Since first meeting Marko, Alana and bub Hazel I’ve become obsessed and now buy single-issues because I simply can’t wait for the Volumes.
But there is a downside to having been spoilt rotten with my introdiction to comics – and that is finding other, equally enthralling, series’ to get hooked on. I’ve had some luck with ‘Ms Marvel’ and enjoy the ‘Peter Panzerfaust’ series – but nothing comes close to my ‘Saga’ obsession … until now.

Comic fantasy series ‘Rat Queens’ is created by the man behind ‘Peter Panzerfaust’, Kurtis J Wiebe and published by my favourite, Image Comics. Roc Upchurch does the art, and ‘Saga’ favourite Fiona Staples the incentive covers. 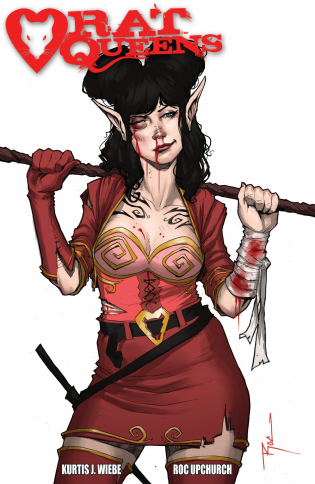 ‘Rat Queens’ Volume 1 is the collection of issues #1 to #5, and follows a group of female monster-hunters for hire – Hannah, Violet, Dee and Betty – who work hard and play hard (to the point of destroying the very town they’re often hired to save).

When we meet them in issue #1, the Rat Queens are being given various monster clean-up assignments, along with groups of other mercenaries who have angered Mayor Kane with their violent revelries. But while on assignment cleaning up goblins, the Rat Queens are ambushed by an assassin and nearly murdered – they later discover the other mercenaries were similarly set-upon, and from there the arc becomes a ‘whodunit’ of who would want these lovable fucks-ups eliminated. 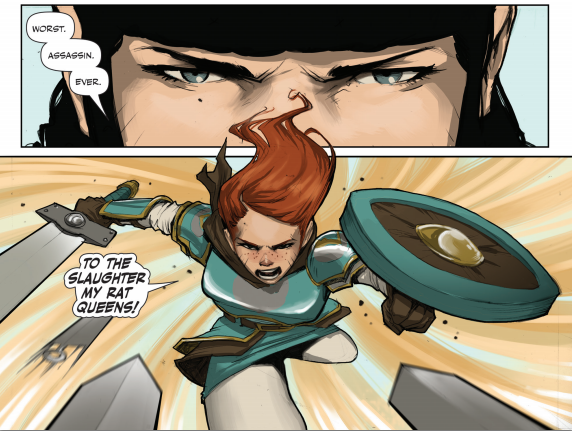 I fucking love this series. And my love is getting up there with my ‘Saga’ obsession, if my impatience for issue #8 (due out on September 3) is any indication.

I love this series because it’s so funny – and mostly of the rude and crude variety. The awesome foursome who make up the Rat Queens are delightfully detestable – Hannah is an Elven Mage with an attitude problem; she’s most likely to throw the first punch and when she gets mad, she gets scary. Violet is a blood-thirsty dwarf with family issues. Dee is a healer with some serious skeletons in her closet, and miniature Betty is a lesbian smidgen who loves mushrooms and brawling. These women feel a little like anti-heroes, insofar as they really do cause a lot of unnecessary violence and havoc in their town and it’s entirely believable that someone would be so fed-up with them they’d want them dead … but it’s because they’re this amazing mix of vulgar and sassy that I love them. They booze, brawl and bang their bed-heads – but they also have each other’s backs in the thick of battle, and are each dealing with personal problems that are slowly being teased out. 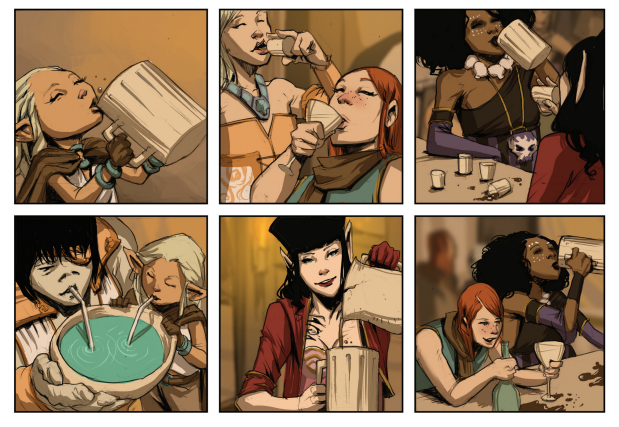 Hannah has an inconvenient dalliance going with Mayor Kane’s head of police, the luscious Sawyer (against his better judgement and good sense). Betty is crushing hard on a girl who can’t see past her violent friends. Violet’s family are a mystery and painfully shy Dee has some secrets up her sleeve. I love that it takes a few issues for readers to start chipping away at the armour each woman wears, but the glimpses we see of vulnerable underbelly hint that this series and these protagonists have a long life in them …

And this series is funny – often juxtaposing gore-splattering, blood-soaked violence alongside awesome one-liners and the types of running jokes that Joss Whedon was known for. 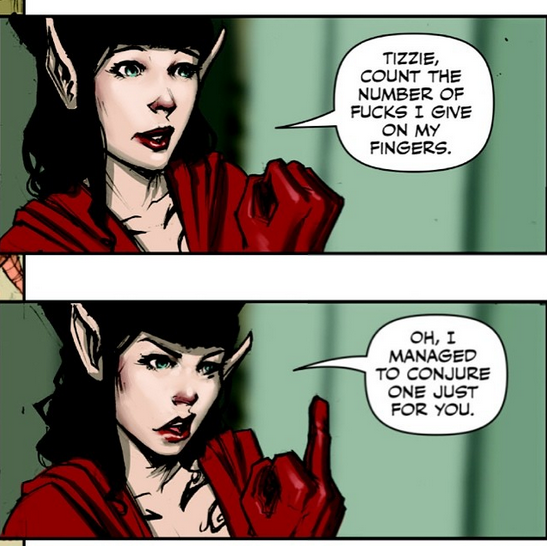 I’m obsessed with ‘Rat Queens’, and I can see why this comic series has taken off in such a big way (it was voted for best new series in the 2014 Eisner Awards). It’s rowdy and rude, heartfelt and gory with four lovably riotous female protagonists who I both want to be best friends with, and would recommend crossing the street to avoid.