‘Waiting on You’ Blue Heron #3 by Kristan Higgins 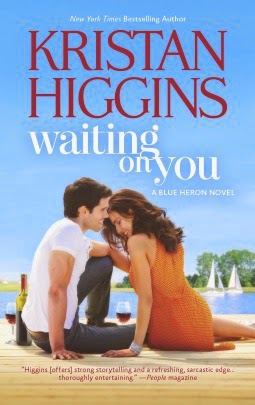 Does being nobody's fool mean that you're nobody's love?

Colleen O'Rourke is in love with love... just not when it comes to herself. Most nights, she can be found behind the bar at the Manningsport, New York, tavern she owns with her twin brother, doling out romantic advice to the lovelorn, mixing martinis and staying more or less happily single. See, ten years ago, Lucas Campbell, her first love, broke her heart... an experience Colleen doesn't want to have again, thanks. Since then, she's been happy with a fling here and there, some elite-level flirting and playing matchmaker to her friends.

But a family emergency has brought Lucas back to town, handsome as ever and still the only man who's ever been able to crack her defenses. Seems like maybe they've got some unfinished business waiting for them—but to find out, Colleen has to let her guard down, or risk losing a second chance with the only man she's ever loved.

Colleen O'Rourke is a modern-day Emma. At least seven children in her local town of Manningsport have been named after her, in thanks for matchmaking their parents. She’s drummed up plenty of business for the local bridal store and lots of people in town are lining up to have Colleen match them with their soul mates.

Colleen’s so good at matchmaking other people only because her own love life is so abysmal. Not many people in town know (because that’s just the way Colleen wants it) but she was burned by her first true-love and never recovered from the heartbreak.

Lucas Campbell was the new boy in town when Colleen was a senior, he and his cousin Bryce moved to town after Lucas’s mother died and his father was thrown in prison then sent to live with his aunt and uncle. Before Lucas Campbell arrived, Colleen was the perfect popular girl – adored by everyone, but always turning down dates from her male classmates. But that all changed when Lucas came to town – with his Spaniard eyes and reluctant smile. In Colleen, Lucas found someone that was just for him, and Colleen finally had someone worth taking a chance on.

But then it all came apart, quickly and devastatingly. Ten years later, Colleen still hasn’t let her heart recover from missing Lucas Campbell. So the last thing she needs is for him to breeze back into Manninsport – in town to spend time with his dying uncle and help get his dopey cousin straightened out and grown up, and reminding her of what they lost.

‘Waiting on You’ is the third book in Kristan Higgins’ ‘Blue Heron’ romance series.

I am so glad that I loved this book, after thinking ‘The Perfect Match’ was fairly ho-hum. This instalment takes us away from the Holland sisters, and focuses on local bartender and Faith’s best friend, Colleen (one half of twin-duo with her brother and restaurant co-owner, Connor). Colleen had been established as the expert flirt in town, and beloved amateur therapist who hears everyone’s problems when she pours them their brew. But it has also been hinted that a break up in Colleen’s past still haunts her to this day, which is why she’s more predisposed to flings than relationships, and no man has been able to turn her head in years.

I have to admit, I wasn’t thrilled with an instalment that took us away from Blue Heron – I was actually hoping for a book about the Holland brother. But Higgins very quickly establishes Colleen’s broken-hearted past, and I was totally in her corner after getting the story of how Lucas Campbell screwed her over. And that’s the thing that bugged me a little about this book – when they were (admittedly) younger, Lucas did a stupid thing that spiralled into really hurtful and left a break in Colleen that still hasn’t healed. It’s bad, and will make you a little weepy when the whole, sad story is pulled out – but I never entirely felt like Lucas accounted for his actions or felt the right level of remorse. But maybe that’s just me.

Considering how hurt Colleen was by Lucas ten years ago, it’s understandable that when he returns to Manningsport she’s at def-con zero;

“About my new man,” she said. “I need someone hot and romantic and intelligent with a great sense of humour who can cook and is also a cowboy or a firefighter.”

Faith snorted. “Okay, I’m thinking … uh … cowboys are pretty scarce. And for hot firefighters, we only have Gerard.”

“You know what would be great? A tragic widower type, like Jude Law in ‘The Holiday.’ Definitely my type. Or Hugh Jackman in ‘Les Mis.’ Le sigh!”

Something I really loved about this book (and something that Higgins does so damn well) is write robust and interesting secondary characters’ with back-stories to surround her protagonists. In Colleen’s world; it’s her father who cheated on her mother with ‘Gail the Tail’ ten years ago, but her mother has never recovered and to this day expects her ex-husband to come crawling back. Colleen has a beloved nine-year-old stepsister called Savannah who is struggling with her weight and body image, particularly when her mother is so body-conscious herself. And Colleen’s father hasn’t been apart of her life since he cheated on his wife and started a new family ten years ago. Then there’s Paulie – a local girl and princess to the Chicken King (who owns a chain of deep friend chicken stores) who asks for Colleen’s help in roping her dream man … who just happens to be Lucas’s cousin, Bryce. But when Lucas comes to town to spend time with his dying uncle, and straighten Bryce out with a job, he gets wind of Colleen’s matchmaking scheme and is not happy.

Higgins is brilliant at writing these interesting secondary characters to round-out her story and heroes, and ‘Waiting on You’ is one of the best examples of this.

I really loved Colleen. A few times Higgins slips in how beautiful and desired Colleen is, but I never resented her as I so often do when female characters are presented as practically perfect in every way. Colleen’s wicked sense of humour and compassion save her from venturing into Mary-Sue territory, as does her brilliant repartee with the people she loves, like her twin;

“Hey, placenta hog. Just because you were born three minutes sooner doesn’t mean you know everything.”

I also really loved Lucas, despite feeling that he didn’t account enough for his actions ten years ago (and, actually, in recent years when he didn’t attempt to reach out to Colleen). He has a really complicated history, that’s definitely dictating his current hang-ups. But his chemistry with Colleen is insane, and towards the end I definitely got the impression that he was reeling from the realisation that he lost so much ten years ago, with a couple of stupid mistakes.

This is probably the biggest emotional roller-coaster Higgins book I’ve yet read. She really presents a fractured couple in Colleen and Lucas, but she makes it work with a delightfully varied and sprawling cast of secondary characters with back-stories as interesting as the protagonists’. I got a little frustrated with the slut-shaming focus towards the end, but otherwise this was a fabulous instalment in the ‘Blue Heron’ series (I WANT MORE!!!!) and one of the best Higgins books I’ve read. Fabulous.