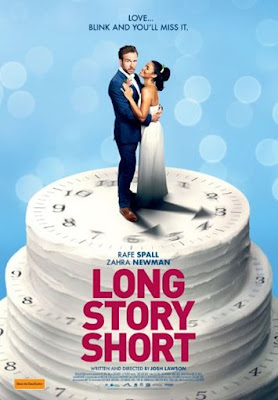 When time-poor Teddy wakes up the morning after his wedding to discover that every few minutes he's jumping forward to the next year of his life, he must use every precious moment wisely to keep from losing the love of his life, and to learn to love the life he's losing.

Okay, just because I got back from the cinema *buzzing* about this movie and desperate to hype it, and even though this is not a movie-review blog, I am bending the rules oh-so-slightly because Long Story Short is in the time-travel romance sub-genre; which I hope everyone knows is MY JAM!

The movie is about Teddy (Rafe Spall) who has just gotten married to Leanne (Zahra Newman) after a long period of dating and a snap-wedding spurred on partly by meeting a stranger (Noni Hazlehurst) at Sydney's famous Waverley Cemetery - who cryptically tells him to stop relying on "later" and live his life now ... Teddy proceeds to wake up one-year into his marriage to Leanne, not having lived one second of the 12-months but finding her 18-weeks pregnant with their child. 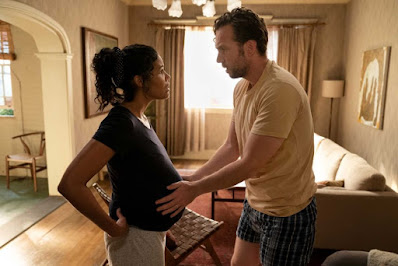 Around about here I thought this was going to be a matter of; each time Teddy goes to sleep he'd wake up one-year into the future (Groundhog Day rules, kind of?) but no - a little bit of magic in the air and Teddy gets only a few minutes or hours before he's being pulled a further 12-months into the future. This way he has to quickly catch-up on all the ways his life is going off the rails; he discovers he wasn't even in his infant daughter's Top 10 first-words ('daddy' ranked somewhere below 'cat' and 'dino'), first he's in marriage-counselling with Leanne, citing his workaholic nature (made worse because he doesn't love the job, just the money). Another year and they're going through a trial-separation, and so on and so forth. 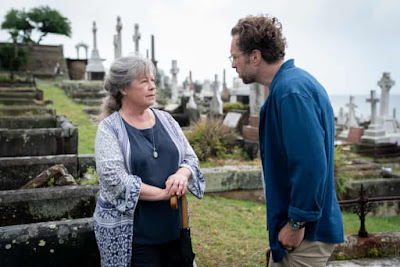 Okay, so - on paper this movie has About Time feels, the fabulous 2013 Richard Curtis movie. I actually count that movie as a favourite and a constant re-watch comfort ... BUT - and this is a big call coming from me - I actually think Long Story Short is a better movie overall and way better at hitting the laughs and feel-goods. I also genuinely think it's going to age *brilliantly* (and not just because writer/director Josh Lawson made what feels like a conscious decision to never mention time by putting a definite context on the yearly jumps).

I often sit through About Time and have to semi-cringe through the parts that haven't aged too well (Tim is actually pretty stalky-creepy if you really want to get down to it, and many have started talking about those aspects of the movie that never sat well, but are ageing particularly poorly. Colin Dray's; ''About Time' Is the Donald Trump of Romantic Comedies' probably sums it up.)

Not so with Long Story Short - which also comes down to the fact that the lesson Teddy is learning throughout is very overt and hella relatable, especially when communicated by the gruff and manic charm of Britishman, Rafe Spall. It's much more of an every-man (or, person) predicament - and while as an audience we can see the pitfalls of Teddy's workaholic lifestyle, it can't be denied that we've all been in his shoes too.

What else helps this film feel like a new breed of rom-com (and one we won't be cringing over in the years to come) is a truly wonderful and diverse cast. Zahra Newman as Leanne is dazzling, a person you can feel genuine remorse at the thought of losing time with her. Ronny Chieng as Teddy's best friend Sam becomes a poignant marker in a different way to Teddy and Leanne's romantic souring, and I loved seeing Chieng tackle a role with such duality. And It was delightful to see Dena Kaplan as Teddy's ex, Becka (I loved her in Dance Academy and will always be thrilled to see her on my screen!). 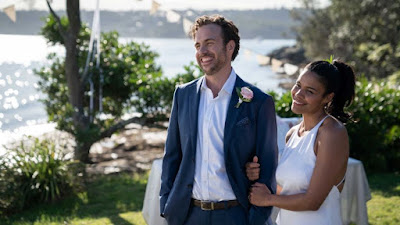 The cinematography and filming locations are also *stunning* - I think it filmed around Manly (I don't 100% know; I just recognised a spot that Looking for Alibrandi filmed when Josie is in the car with her friends?) but it was all gorgeous and more than ever made me just want to pack up and pop to Sydney for a weekend.

I went into this film almost hoping it'd be an Aussie About Time - but then having it wildly exceed my expectations, and even possibly knock that film off my spot of top comfort-watch! It actually though, reminded me more of late-90s, early-00s Australian romantic-comedies when it really felt like we were taking the American blueprint and putting our own mark on it, to make something better and deeper? Josh Lawson is in league with those Australian gems - I'm talking about Pip Karmel movie starring Rachel Griffiths, Me Myself I (1999) or Antony J. Bowman's Paperback Hero starring Claudia Karvan and Hugh Jackman. We were *good* at this - and in recent years it does feel like Australia has started remembering that fact (see also: Top End Wedding!)

Heck, if I'm honest ... this is something lockdown and a trashfire year has given me, and all of us. A reminder that Australian movies - our art - are so goddam good. And you'd think that me (of all people!) wouldn't need reminding, but I did. Right now we're seeing - for the first time in our HISTORY - Australian movies in the Top 3 spots at our box-office (article here). And with Long Story Short having dropped on Valentine's Day - we're now Top 5 Australian movies at the box office, US content totally locked out (BOOYAH!)

Long Story Short was so goddam charming and delightful. It was good for my soul, and I can't wait to re-watch it ... I also can't wait to tell more people about it, and encourage them to behold another new-era in Australian cinema; a more heartfelt, honest rom-com that won't be a guilty-pleasure in a couple years, but will rather stand the test of time (ironically enough). I certainly know that I'll be turning to it for a yearly comfort re-watch in the future, when it comes.