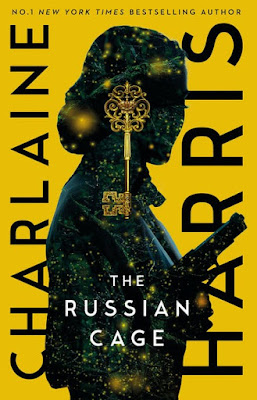 No.1 New York Times and USA Today bestselling author Charlaine Harris is at her best in this alternate history of the United States where magic is an acknowledged but despised power in this third instalment of the Gunnie Rose series.

Picking up right where A Longer Fall left off, this thrilling third instalment follows Lizbeth Rose as she takes on one of her most dangerous missions yet: rescuing her estranged partner, Prince Eli, from the Holy Russian Empire. Once in San Diego, Lizbeth is going to have to rely upon her sister Felicia, and her growing Grigori powers to navigate her way through this strange new world of royalty and deception in order to get Eli freed from jail where he's being held for murder.

Russian Cage continues to ramp up the momentum with more of everything Harris' readers adore her for with romance, intrigue, and a deep dive into the mysterious Holy Russian Empire.

'The Russian Cage' is the third book in Charlaine Harris' alternate-history urban fantasy series, in which the Holy Russian Empire rules over a portion of America after influenza wiped out a majority of US politicians and left a power-vacuum that was filled by the escaped royal family of the Romanovs.'Russian Cage' picks up a little down the ways from second book 'A Longer Fall', after which our 'gunnie' (gun-for-hire, strictly protection not assassination) Lizbeth Rose parted ways with magical grigori Eli, who returned to the Holy Russian Empire and left Lizbeth in Texoma ('Texas') - even though they'd established a powerful romantic entanglement. Eli had family and business to settle back home, and that side of the country is tricky for Lizbeth to enter into - because she's a descendent of Rasputin, and her blood is of great value to the Tsar for healing purposes.But it's no surprise that Book 3 kicks off with Lizbeth getting word that Eli is in trouble - imprisoned and accused of a crime nobody will reveal - and she promptly decides it's finally time to visit the mysterious Holy Russian Empire (which roughly makes up the entirety of California) to save Eli.Now, my heart kinda sunk once I realised that a chunk of this book would be Lizbeth and Eli separated and following Lizbeth as she tries to break him out and save him. I get it, I get it - it's way more interesting if she has to navigate Eli's territory solo and raises stakes if his freedom is her motivator. But I've come to really appreciate the Lizbeth and Eli romance, and a big basic part of me just wanted to read them together again (I know, I know - stories need 'tension' and 'plot' and all that jazz!)It is really interesting finally seeing the oft-spoke-about Holy Russian Empire through Lizbeth's eyes for the first time. The story is mostly situated in San Diego, and involves Lizbeth meeting Eli's family (his mother, sisters, brother and stepbrothers) and getting up close to the monarchy and high-society. She also gets to reconnect with her sister, Felicia, who is situated at the Grigori School where she's learning magic and also subterfuge, as becomes apparent to a fairly proud Lizbeth.I did really enjoy this story, *even though* the Holy Russian Empire was kind of a let-down after being so built-up in the previous two books? I think it's mostly that the plot is very focused on political intrigue and savagery, so the scenery kinda passes us by? But also speaking of the intricate machinations of the plot - I also found some really Big Events just whizzed by me and it wasn't until characters were recounting what happened that I even realised where we'd moved to in the story? I think it's because lots of these finer-points happen off-page, and it's hard to keep up when there's so many major and minor characters that fill out the Russian Monarchy coming and going.I am usually a big fan of Charlaine's ability to pace and build tension, but honestly and compared to the finely-detailed and edge-of-your-seat finesse to be found in her 'Harper Connelly', 'Lily Bard' and 'Aurora Teagarden' books (I will concede that sometimes 'Southern Vampire' plots were *a trip* ... especially during the damn faerie instalments) - I just don't have the same admiration for the crime and thriller details of the plot in 'The Russian Cage'. It's not working like a well-oiled machine, and I think it's mostly down to a particularly bloated cast and too many layers of off-scene political infighting. Which - to be fair - previously Charlaine has focused on small-town intrigue and very insular-type stories (even Sookie mostly dealt with low-level vampire bureaucracy of Louisiana, and tried hard to stay off the radar of the higher-ups). 'Gunnie Rose' is Charlaine trying to fold in alternate histories, reconfigured politics, and all playing out on a much bigger stage of how an unstable Holy Russian Empire fits into this new America - with Lizbeth as a possibly lynchpin amidst it all too. It's a LOT.I will also flag that I kinda read 'The Russian Cage' assuming it was closing out what would be a trilogy. But as I got closer to the end I started thinking; "Hmmmm, feels like there's more to come," and then LO! - I check and there's a fourth book due now too, for 2022. Which makes me nervous. Because Charlaine Harris is notorious in many of her series for totally and tragically upending her protagonist's lives once they get a *little bit* settled. And 'Gunnie Rose' has been the darkest in tone of all Charlaine's series so far, so I'm not holding my breath for everything to continue to be smooth-ish sailing for all involved.But, I am excited to see where else this story goes. There's a real trend now for alternate American-history Western Dystopia's (see also: 'Outlawed' by Anna North, and 'Upright Women Wanted' by Sarah Gailey) that I am *so intrigued by* and wonder if its a byproduct of the Trump era to imagine all the sliding-doors ways that America avoided catastrophe throughout history (certainly in Charlaine's series, the question of what would have happened if Russia had a foothold in America, and a deadly pandemic was mismanaged to the point of fracturing the United States is ... *pointed*. And she started this series in 2016, in 'Unfettered II: New Tales By Masters of Fantasy' Anthology!)