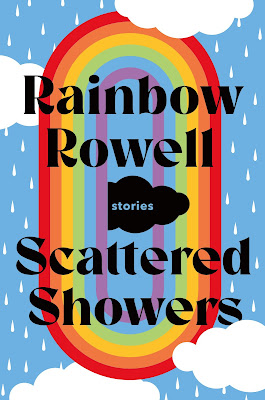 'Scattered Showers' is an Anthology collection of nine Rainbow Rowell short-stories, five of which are brand-new created for this collection.Many have appeared elsewhere; like the first story 'Midnights' from the 2014 Stephanie Perkins edited YA anthology collection 'My True Love Gave to Me: Twelve Holiday Stories', which is about two friends who we first meet at a 2014 New Years Eve party and then follow through many NYE parties right through to their first year home after college.'Midnights' also appeared in a hardcover gift 'Almost Midnight: Two Festive Short Stories' alongside the second story in the new 'Scattered Showers' collection, 'Kindred Spirits' - which is about unacquainted teenagers in 2015 waiting in line across 4 days, for the new Star Wars movie 'The Force Awakens.'These two stories really set the pace of the whole collection, and Rainbow Rowell's biggest theme throughout all her works which is; duos. Sets. Two people, soulmates or mates for right now ... truly her biggest thread through all Rowell stories from 'Simon Snow' to the 'Pumpkinheads' graphic novel is the dyadic - a focus on two people. For this reason I really wish they'd called this collection 'Double Rainbow,' but I understand a quite literal Rainbow/Rainbow may have been confusing over-kill.We have the new short-story 'Winter Songs for Summer' - about a girl getting over a break-up, and her downstairs college neighbour who helps her grief maturate with mix-tapes.'The Snow Ball' is another newbie, a very Taylor Swift-feeling short about a guy friend getting ready to attend a school dance with a girl who is not his best female friend, and the ways they talk circles around one another to figure out how they both feel about that.'If the Fates Allow' is a 'Fangirl' prequel which did release as an Amazon Original Story in 2021, and features the character of Reagan home for the first times during Covid and having back-porch chats with her neighbour during uncertain times.'The Prince and the Troll' is another original and the weirdest one in this collection, to me - it's a fantastical allegorical (I want to say climate-fiction?) short story that felt a little like it wants to be 2017 film 'The Shape of Water' but mostly reads like a commercial for Starbucks?'Mixed Messages' made it up to me though, as it's a short-story featuring the characters from Rowell's debut (and my fave!) novel, the 2011 'Attachments'! It's a real-time glimpse into where these characters ended up, and I delighted in it! I also think it's a great prompt for anyone that isn't aware of Rowell's debut novel, to go back and discover it!'Snow for Christmas' is a 'Simon Snow' short story, which I did not read because I haven't yet been able to get into that series. I'm sorry! I will, eventually - one day!And finally, another fave for me was 'In Waiting' ... which is a delightfully trippy and heartfelt meta short-story which felt very much like the 2006 Will Ferrell movie, 'Stranger than Fiction.' It's about quite literally a new character called James, who has been dropped into the between-place where (presumably) Rainbow Rowell's ideas hang out, her not-quite-yet fully-formed and outlined characters hang in limbo until she knows what to do with them ...

... and the longest-serving character in this stable is Anna, who has grown up in this place and who Rowell seemingly can't let go of, but won't slot her into a novel yet either (God Forbid she be used in a short-story though.) This one was a little 'The Good Place' too and I absolutely loved it.Overall I think Rowell's short-story talent is on display here; certainly the stories that she maybe had more time to develop (like those previously published) are the strongest, while her forays into genre-fiction and metaphor fell flat for me, except in the Rainbow Rowell metaverse of character limbo 'In Waiting.'I do love that all of these short stories collected in one beautiful, hardcover place (with illustrations by Jim Tierney) - and how they solidified for me, Rowell's ongoing obsession with duality and soul-mates, two peas in a pod and the dyad of it all.I'm glad I own this, because I am a fan ('Attachments' remains my fave, followed closely by 'Pumpkinheads' graphic novel, and 'Fangirl' - but the 'Midnights' short-story is also up there) and I do think I'll keep coming back to this collection and these little tasters of growing up, coming-of-age, friction and fragility, connection and love ... one example of this is a line in 'Midnights,' when a group of friends have re-gathered at their annual NYE basement party the first year they've (mostly) all returned home from first-year at college;

"Is it weird being in Omaha?" Simini asked her. "Now that everybody's left?"
"It's like walking through the mall after it closes," Mags said. "I miss you guys so much."